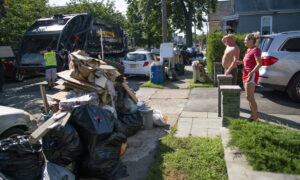 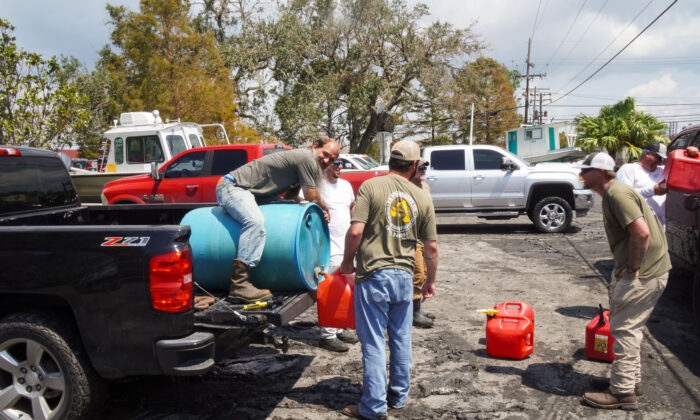 Without electricity, gas, food, or cellphone connection, residents help each other
By Jackson Elliott

In the aftermath of Hurricane Ida, New Orleans bakes in a strange silence.

The muffled buzz of a few generators and the splatter of cars cutting through inches-deep water are the only modern noises. A thick pudding of bayou mud covers the ground. For a while, there’s no barrier between nature and the bayou’s people.

Without power, all of southern Louisiana runs on cooperation and trust. Locals put aside their personal tragedies and work to help their neighbors.

In Jefferson Parish, on the southwest side of the metropolitan area, Hurricane Ida’s waters overwhelmed the levee.

When waters first crested the levee, they were stopped by a backup sandbag barricade, local Joseph Casso said. But rescue workers had to break it down.

“At some point, they had to go rescue people in lower Lafitte. So they had to bust out the sandbags, which just let the water in,” he said.

The waters surged into the rest of the city.

Only a few days ago, the entire neighborhood was under four feet of water, local resident Taddese Tewelde says.

Tewelde owns a local Piggly Wiggly grocery store. When the floodwaters hit, they destroyed much of his store. Now, he offers his remaining essential items for free.

“The hardest part is dealing with the insurance companies,” he said. “They don’t have no mercy. Other than that, all this cleaning will pass.”

The first priority after a disaster isn’t food, air conditioning, water, or gasoline, said Bobby Matherne, a local resident. Instead, it’s getting cell signal and internet back up. Emergency services all need good communications.

“Nobody can communicate without it,” Matherne said.

Along with other men, Matherne worked to fill large gasoline cans from a barrel. The men placed the cans in a pickup truck that towed a flat-bottomed airboat.

During the hurricane, Matherne stayed home. When he realized the storm was too strong, he fled. He didn’t even have time to evacuate his chickens; 14 of them died. When he returned, he started working to fix the neighborhood.

Without power, cellphone towers rely on diesel-powered generators filled by Matherne and others. Matherne drove roughly 100 miles and paid for the barrel of gas himself. He expects to be reimbursed by his company. The gas was for fueling the boat to carry diesel to the generators.

Their efforts paid off. By Sept. 3, only five days after the hurricane, Jefferson Parish had five bars of cellphone signal.

Flooding wasn’t the only damage Ida inflicted. Without power, refrigerators stop working. Stores and restaurants that survived the floods soon found that they were out of food.

The local St. Anthony Catholic Church distributed the meals to locals from a tent outside its water-ravaged church. The meals included spiced chicken and rice, as well as hearty muffuletta sandwiches. Without working power, warm food was rare in the city.

The volunteers handed food to drivers from the neighborhood. However, they won’t be meeting for Mass at the end of the week. The building was flooded with two feet of water and is currently unusable.

“Mass will be dispensed this weekend,” said Father Luke Nguyen. “Our lives are broken, so we just pray to God that he will continue to bless us.”

Not a Drop to Drink

After Hurricane Ida, temperatures in Jefferson Parish remained in the high 80s and 90s. Without air conditioning, every day means a new struggle against the heat. New Orleans residents sweat without escape or relief.

To survive, people need to consistently drink water. However, the storm left tap water polluted. Beside the road through Jefferson Parish, the water left by Ida stinks, dark with foul-smelling bayou mud.

In the heat after the hurricane, a bottle of cold water becomes a rare treasure.

“That was what they were begging for yesterday. Ice cold water,” he said. “One guy said the other day, ‘This is the first cold drink I’ve had since the hurricane.’”

The power won’t turn back on for many days yet, residents said. To help protect others from the heat, some families share their generators and houses.

“We feel very blessed. We have a house generator, so we have people staying with us. We have all of our neighbors plugged into our generator,” said resident Andrea Burlette.

It seems Jefferson County residents are able to endure hurricanes because of their community. Community is also why they keep living in a place that seems doomed to face a watery apocalypse every few decades.

“People are saying, ‘Why don’t you get out if you want to avoid the flooding?’ They don’t understand,” said another local, Richard Bolott. “We’re friends. Our family is here.”