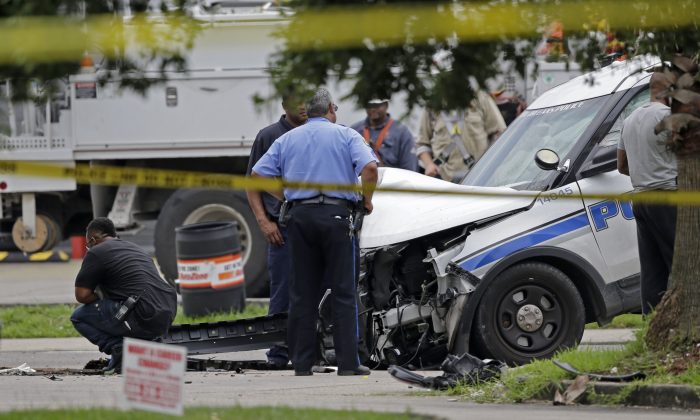 Investigators look over a New Orleans Police department vehicle in which one officer was shot and killed while transporting a prisoner in New Orleans, Saturday, June 20, 2015. The New Orleans Police Department said Officer Daryle Holloway was shot while transporting Travis Boys, who managed to get his handcuffed hands from behind his back to the front, grab a firearm and shoot the officer. A manhunt was underway for the 33-year-old Boys, according to Police Chief Michael Harrison. (AP Photo/Gerald Herbert)
US

NEW ORLEANS— Authorities canvassed a New Orleans neighborhood late into Saturday night in search of the man believed to have fatally shot a police officer who was transporting him — handcuffed and in the back of a police SUV — to jail.

Saturday morning’s death of veteran officer Daryle Holloway, 45, left investigators struggling for answers as they tried to cope with a colleague’s death. It was unclear how the suspect got the gun, how he worked his handcuffed wrists from behind his back or why he was able to get through a barrier that separated him from the front seat.

“I literally live two blocks away and I just want to go home,” Jayne Greppin as sunlight began to dim Saturday evening. She said police hadn’t stopped her when she left her house to get cigarettes, but wasn’t allowed back onto her street shortly thereafter. The search spanned several blocks and police were keeping some people away from their homes while not allowing others to come out.

“He will be caught and he will be brought to justice for the murder of Officer Holloway and for this assault on our entire community,” police chief Michael Harrison said in a statement.

The shooting happened Saturday morning as Boys was handcuffed in the back seat of the vehicle. Boys managed to get his hands from behind his back to the front and obtain a weapon as well, Harrison told reporters at the scene in a video interview posted on the department’s Facebook page.

Boys got to the front seat through an opening in the cage that separates front and back seats and shot Holloway, Harrison said.

“Officer Holloway put up a fight to try to get the subject to not exit the vehicle but succumbed to his injuries,” Harrison said.

Department spokesman Tyler Gamble said police were trying to determine what weapon Boys used and how he obtained it, but do not believe Boys used the officer’s gun.

John Polk, who lives around the corner from where the police SUV came to rest, said he was just waking up when he heard a loud noise and his power went out. The noise, he figured, was an electrical transformer blowing.

“I look out the door — I’d heard the boom — I see the fire truck here on the corner,” he said. It was only later, after police had swarmed into the area that he learned what happened.

A helicopter circled overhead as marked and unmarked units from state police and other law enforcement agencies cruised the side streets. Utility workers worked to replace the downed power pole.

State police, St. Tammany Parish deputies, Housing Authority of New Orleans police and the U.S. Marshals Service were among those searching for Boys.

Vincent Alexander, a prep cook at Margaritaville restaurant in the French Quarter, said he was walking home from work when police detoured him a short distance from his house. “I just called my roommate. They’re not letting him get out the house.”

Holloway had been a member of the New Orleans Police Department since 1992. He was the father of three children.

Harrison said Holloway was not the arresting officer but was transporting Boys to a jail when the shooting occurred.

Harrison said he met with two of Holloway’s children and Holloway’s former wife at the hospital after he died. “As a new chief, it was the hardest thing I’ve ever had to do in my life,” said Harrison, who became chief last year.

He said he had known Holloway for 23 years and described him as “a great police officer.”

Mayor Mitch Landrieu decried the killing as “the lowest of the low” and called on the public to help police with information on Boys’ whereabouts.

“Killing an officer in the line of duty is an attack on our community that will not stand,” Landrieu said in a statement. “The heart and soul of New Orleans is heavy today as our community mourns one of our city’s finest.”

The last New Orleans Police Department officer killed in the line of duty was Officer Rodney Thomas on July 7, 2013, according to Gamble. More recently, a Housing Authority police officer, James Bennett Jr., 45, was found shot to death in his patrol car.