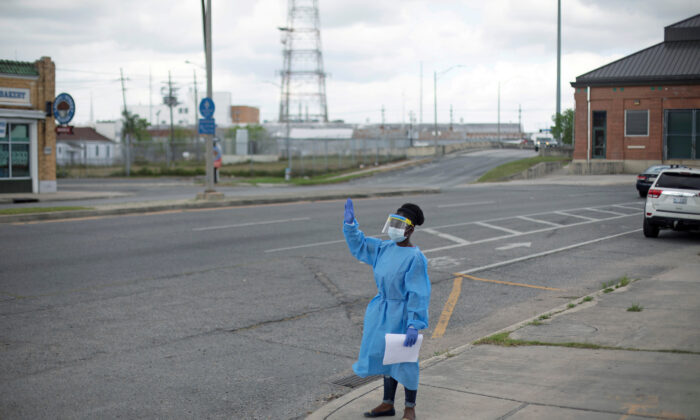 A staff member of Odyssey House Louisiana, which runs a drive-thru testing site for the CCP virus, waves to passing vehicles to try to alert the community about testing in New Orleans, Louisiana, on March 27, 2020. (Kathleen Flynn/Reuters)
AMERICA

The New Orleans area now has the highest COVID-19 death rate in the United States, as of April 3, surpassing hot spots such as New York City.

Two Louisiana parishes, which are equivalent in that state to counties, have the most CCP (Chinese Communist Party) virus deaths per capita in the country, said Gary Wagner, an economics professor at the University of Louisiana–Lafayette. Wagner has been tracking the pandemic’s effects in the state, The Wall Street Journal reported.

St. John the Baptist Parish and Orleans Parish have the highest and second-highest death rates from the CCP virus, respectively, he said. Orleans Parish encompasses New Orleans, the largest city in Louisiana.

According to a graph provided by Wagner to the Journal, St. John the Baptist Parish has a death rate from the virus of more than 39 per 100,000 residents. Meanwhile, the death rate for New York City was 18.86 per 100,000 people, the New York Post reported.

Edwards has said that Louisiana’s death rate can be partially attributed to the relatively poor health of its residents; the state has high levels of diabetes, obesity, hypertension, and heart disease.

“We have more than our fair share of people who have the comorbidities that make them especially vulnerable,” the governor said.

On March 23, Edwards implemented a statewide stay-at-home order, while some places in the two parishes have implemented curfews.

Edwards warned on April 5 that Louisiana will run out of ventilators by April 9.

“We’re a couple of days behind that on ICU beds,” Edwards told CNN.

The Centers for Disease Control and Prevention (CDC) reported March 31 that individuals with diabetes, cardiovascular disease, and lung disease have a higher chance of succumbing to the virus or being hospitalized in intensive care units (ICU).

“Based on preliminary U.S. data, persons with underlying health conditions, such as diabetes mellitus, chronic lung disease, and cardiovascular disease, appear to be at higher risk for severe COVID-19-associated disease than persons without these conditions,” the agency wrote in a report last week.

About 78 percent of patients admitted to ICUs and 71 percent who were hospitalized without ICU treatment had “at least one underlying health condition or risk factor,” according to the CDC.