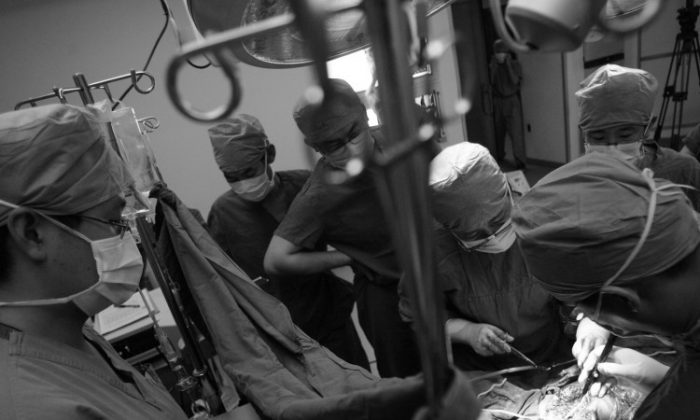 Doctors carry out surgery in China in 2007. A new program being trialed by the Ministry of Health has led netizens to suspect that it was announced as a form of damage control amid mounting international pressure over abusive organ transplantation practices in China. (China Photos/Getty Images)
China

As international pressure mounts, a new organ transplant directive by the Chinese regime points to growing unease in the Party about the attention being given to state-sanctioned organ transplant abuse, and possibly the wish to avoid criminal accountability.

The new program to be trialed is titled Management for the Acquisition and Allocation of Organs, and it will be administered under the Ministry of Health. It means that when a hospital that can conduct transplants receives an organ, the national allocation and sharing system will make the final decision as to who will receive the organ, making sure that patients with the most urgent need are treated first. The news was widely reported by mainland Chinese media on Oct. 10.

The document is being released amid growing concerns in the international community about live organ harvesting in China, where the military-medical complex is known to target prisoners of conscience for execution and organ extraction. Comments on China’s microblogs show that Chinese people are also becoming aware of the abuses.

“This is in effect acknowledging rampant organ transplantation in China,” commented Wen Zhao, a Canada-based political analyst for New Tang Dynasty Television, a primarily Chinese language broadcaster. “Exposing organ harvesting has put a great deal of pressure on the Communist Party,” he said.

In discussing and sharing the news, Chinese Internet users saw it against the backdrop of recent revelations and public events which have raised the profile of concerns about mass organ harvesting of prisoners of conscience.

“On Sept. 12, a congressional hearing took place at the U.S. Capitol on organ harvesting in China,” one Weibo post said, which was widely forwarded. “On Sept. 19, the documentary Free China was shown at the United Nations Human Rights Council, calling on nations to voice their concerns about organ harvesting in China. On Oct. 4, 106 congressmen co-signed a letter, asking the Secretary of State to release any information relating to transplant abuses in China.”

The post continued: “Now, at this very moment, the ‘Management for the Acquisition and Allocation of Organs in China program has been introduced.”

“It can only be pure coincidence,” one netizen commented sarcastically.

“Congratulations on the creation of the world’s largest legal organ trading system,” commented another netizen.

“It is said that the success rate of organ transplantation in China is the highest in the world. Yet the Ministry of Health has never bothered to show off such matters. It is totally against their usual behavior. Why?” a user from Beijing asked.

The response came quickly from another user: “Because of a hidden bloody truth.”