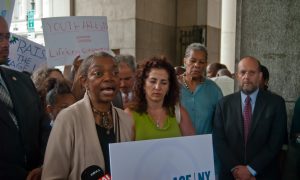 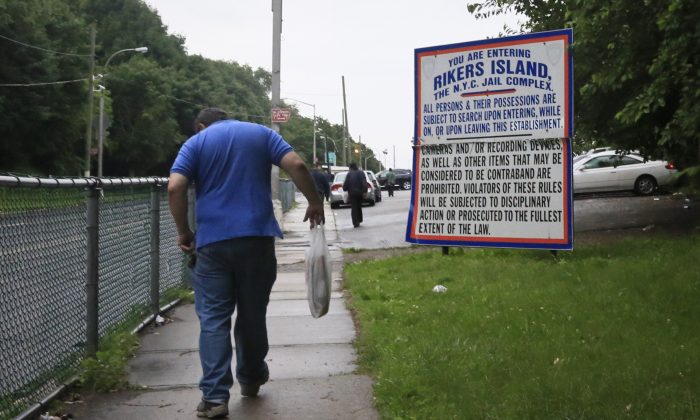 A sign informing visitors what can be brought to Rikers Island jail in the Queens borough of New York, June 11, 2014. City lawmakers will call a special meeting to hear from correction officials how they plan to quell rising levels of violence in city jails, and their plan to effectively treat a growing mentally ill inmate population. (AP Photo/Bebeto Matthews)
Crime and Incidents

Commissioner Joseph Ponte, who took the helm of the county’s second-largest jail system in March, insisted at a meeting of the New York City Board of Correction he was trying to quell rising levels of violence.

Ponte, who had reduced the use of solitary confinement by two-thirds in Maine’s state prisons, said the June 13 move on Rikers Island was aimed at volatile inmates who have broken jailhouse rules and owe days in solitary.

But board members rejected the argument, noting the move jeopardized the health of some inmates, particularly those on psychotropic medications who were taken from air-conditioned mental observation units and put into uncooled solitary cells. A federal judge has ordered that such inmates, deemed heat-sensitive because the exposure to heat while on such drugs can be fatal, shouldn’t be placed in uncooled cells.

Other inmates who were moved were denied medication and had seizure disorders, they said. At least one inmate suffered a seizure, Ponte said.

“I would just hope that you would review these issues and in the future instruct your staff to be consistent with the board standards and not to violate these rules which are not just rules but designed for the safety of the prisoners,” said board member Dr. Robert Cohen.

During a City Council oversight hearing on violence and mental illness at Rikers the day before the inmate moves, Ponte was repeatedly asked about a list of hundreds of inmates who owe time in solitary confinement but are in general population because there’s not enough space. Correction officials argue that those inmates, many of whom they say are gang members, drive the violence on Rikers.

On Tuesday, Ponte told board members that figure is closer to 1,000 inmates. A number of them are high-risk for harming themselves and others and needed to be separated to stem surging violence, he said.

“What we don’t have, and have not had for probably more than five years now, is a plan that’s impacted the level of violence on Rikers Island,” he told the board.

There were 21 slashings in one recent six-week period and a total of 87 during fiscal year 2014, according to a letter sent by Ponte to board members Monday night and obtained by the AP. There were a total of 68 total such slashings the previous fiscal year and 55 in fiscal 2012, the letter said.

“Under such circumstances, I felt that it was imperative to take prompt action to prevent further violence,” he wrote.