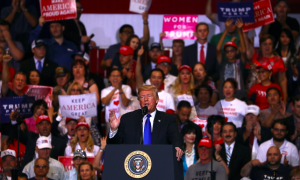 PAHRUMP, Nevada—A group of Nevada activists announced on Jan. 21 their independence from the current state in an effort to break the rural counties away and form a new state called New Nevada.

The activists in the New Nevada state movement hope to break all 15 rural counties away from Nevada. If the movement is successful, Clark County, which contains Las Vegas, will be the only county remaining in the current state.

In 2017, Nevada had an estimated population of 3 million, while Clark County alone had 2.2 million people.

Robert Thomas, the chairman of the New Nevada State movement, was joined by a crowd of supporters at the event in front of Nye Courthouse.

“Our action is based upon the God-given rights of every person,” stated Thomas. “In this declaration of independence from the state of Nevada we repeat what our founding fathers said in our nation’s Declaration of Independence, that we hold these truths to be self-evident, that all men are created equal and that they are endowed by their Creator with certain inalienable rights, among that those are life, liberty, possession of property, and the pursuit of happiness.

“However, when any government becomes destructive of these legitimate ends, it is the right and duty of the people to alter or abolish this destructive government and to institute a new government.”

The Declaration of Independence made by the activists of the New Nevada state claimed three reasons for the movement:

1. The rural areas of Nevada have not been properly represented by the current state Legislature. The Nevada State government has enacted regulations, such as “the infamous Commerce Tax,” against the will of the residents living in the rural areas.

3. The current state Legislature has failed to provide a republican form of government, as guaranteed by Article IV, Section 4, of the U.S. Constitution.

Therefore, the New Nevada Declaration of Independence concluded that “it is the Right of the People to seek a peaceful and Constitutional remedy to this abuse of powers.”

The activists in the event wore yellow vests. Thomas explained that their actions were in solidarity of French citizens’ movement against socialism and globalism, and in solidarity of all people who love liberty.

The activists in New California state movement have been wearing yellow vests since last December for the same reasons.

Both movements attempt to follow the same Constitutional process in which West Virginia broke away from Virginia in 1861.

“This is a historical Constitutional movement across the nation,” said Dane Senser, an activist who came to support the event from California. Senser is one of the leading figures in the New California state movement.

Senser said there are now at least four other states in the United States with similar movements.

On Jan. 22, he retweeted an Epoch Times article about murder charges for a suspected illegal alien in Nevada and wrote, “This is why[,] New Nevada state[,] the declaration of independence from Nevada was read yesterday!”

THIS IS WHY NEW NEVADA STATE
THE DECLARATION OF INDEPENDENCE FROM NEVADA
WAS READ YESTERDAY !
newnevadastate@yahoo.com https://t.co/sQuc2udjUd

Ilene Eng contributed to this report