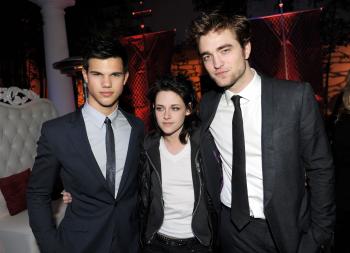 By Stephen Summer
Print
New Moon fever hit Los Angeles Monday night Nov. 16, as the much anticipated sequel to the Twilight film premiered in Los Angeles four days before its release in theaters this weekend on Nov. 20.

Close to 3,000 people were invited to the premiere, but thousands more screamed and held up signs outside the Bruin and Regent theaters in the Westwood Village area of Los Angeles where the film premiered.

The stars of the film were all there – Kristen Stewart playing Bella Swan, the human who falls in love with Robert Pattinson's character, Edward Cullen, the tall, white vampire who falls in love with Bella and leaves her because he thinks its the only way to protect her; and Taylor Lautner, the werewolf who protects and builds an increasingly closer relationship with heartbroken Bella.

All the stars made sure to meet several of their screaming fans and sign autographs and have photos taken with them before hitting the red carpet.

New Moon's other stars, such as Dakota Fanning and Ashley Greene, were at the premiere as well.

The Twilight series has become a film phenomenon which has built a huge following of young adult fans who constitute the novel's fan base. New Moon is the second film in the series. The first film grossed $383 million dollars even though it cost only $37 million to make.

Fandango, a well-known service in the United States that sells tickets for events such as films over the Internet and phone, said that New Moon is already breaking records—the company said that New Moon has outsold any other movie in the last decade, outselling advance tickets for films such as Star Wars: Revenge of the Sith, Harry Potter and the Half-Blood Prince and The Dark Knight.

Nikki Finke, a well-known Entertainment blogger, wrote on her blog that the "latest chapter of The Twilight Saga is currently accounting for 86% of weekly ticket sales on Fandango."