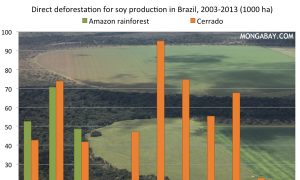 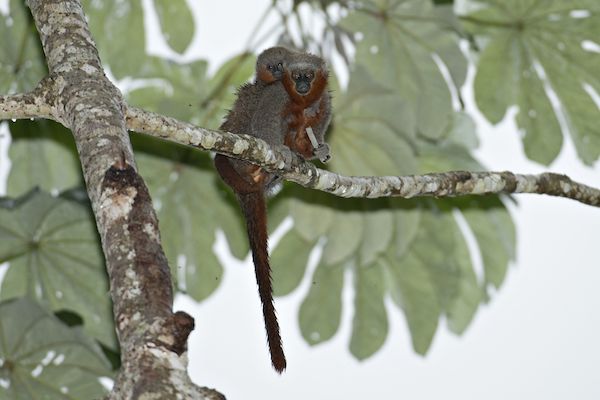 In 2011, Julio César Dalponte noticed a peculiar looking titi monkey on the bank of the Roosevelt River in Mato Grasso, Brazil. Titi monkeys, genus Callicebus, are common throughout South America, but this one had a flaming orange tail, light gray forehead stripe and ochre sideburns, which didn’t match any known titi species.

Dalponte, a researcher at the Instituto para a Conservação dos Carnívoros Neotropicais, and a team of scientists soon enlisted the support of the Conservation Leadership Programme and mounted multiple expeditions to the area to collect data on what they believed to be a new species.

Milton’s titi monkeys, known as “zogue-zogues” to locals, live in a small area of lowland rainforest between the Roosevelt and Aripuanã rivers. Nearly 70 percent of its habitat is in the state of Mato Grosso, with the remainder in Amazonas to the north and a very small percentage in the eastern part of Rondônia.

“It goes without saying that we are really excited about this new discovery,” said researcher Felipe Ennes Silva from the Instituto de Desenvolvimento Sustentável Mamirauá (Mamirauá Institute for Sustainable Development), who collected the data for the new species identification. “It is always thrilling to find something new in the Amazon, as it reminds us just how special this rainforest is and how lucky we are to have it on our doorstep.”

The study’s authors say that some 57 percent of the monkey’s territory is protected through a patchwork of conservation areas and Indigenous lands, but that mankind is slowly but surely eroding the natural habitat of the newly discovered species all the same.

According to data from Global Forest Watch, the area comprising the range of Milton’s titi monkey lost about 212,000 hectares of tree cover from 2001 through 2012. Most loss occurred in the middle of the monkey’s range, which is largely lacking protection. As a consequence, portions of intact forest landscapes (IFLs) – undisturbed forest areas large enough to retain their original levels of biodiversity – have been degraded since 2000.

Mato Grosso has some of the highest rates of deforestation in the Amazon, as forests are cleared for cattle pasture and soy fields. A 2014 study published in Environmental Research Letters linked the soy sector to 65 percent of the state’s deforestation.

But the greatest threat to the habitat of Milton’s titi monkey, according to Dalponte and his colleagues, is the Brazilian Government’s development program, which includes plans to construct several new hydroelectricity dams, including one on the Roosevelt River, and an extended road system within the Amazon.

According to Silva, “it will take more than luck if we are to keep making scientific finds like this. The rainforest is under threat like never before, and it will take dedicated, hard work – not just by conservationists but by the government and every other sector of society, too – to make sure that this forest ecosystem can continue to support a wide diversity of life and help regulate our planet’s climate.”