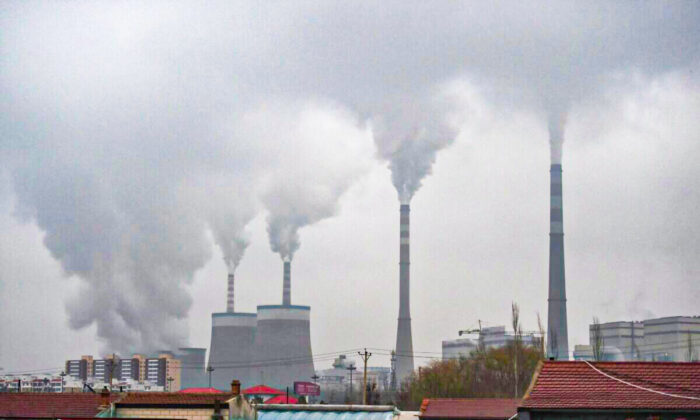 In this photo taken on November 19, 2015, smoke belches from a coal-fueled power station near Datong, in China's northern Shanxi province. (Greg Baker/AFP via Getty Images)
Australia

A study by the Australian National University (ANU) of China’s moves toward the decarbonisation of its economy has noted there is a potential for Beijing’s demand for coal imports, including from Australia, to fall substantially by 2025.

Energy economist and lead author of the study, Jorrit Gosens, said that the modelling indicates major coal exporters such as Australia could be hit hardest by this change.

“Beijing’s plans for rapid decarbonisation and energy security signal the end for Australia’s current coal export boom,” he said. “And this isn’t going to happen far off into the future; it is imminent. Our modelling predicts Chinese demand for Australian thermal coal will fall to between 30 and 40 megatons in 2025, down from about 50 megatons in 2019.”

Regarding coking coal imports, Gosens said Australia is the country that potentially stands to lose the most, with exports to China anticipated to fall to between 20 and 22 megatons, down from around 30 megatons in 2019.

Coking coal, also known as metallurgical coal, is primarily used for steel making and other industrial processes, while thermal coal is used for electricity production.

While in normal years, about 25 percent of both Australia’s thermal and coking coal exports are bound for China, Gosens warns that Australian businesses and political leaders may not be able to rely on increased demand for Australian coal, even though the ban on imports has been lifted.

Beijing’s temporary ban on Australian coal came after Australia’s Foreign Minister Marise Payne called for an inquiry into the origins of COVID-19 in April 2020.

“Our results mostly show that China’s investments in coal transport infrastructure have greatly reduced the cost for China to cut imports, whether to impose punitive trade embargoes or to prop up domestic mining sector demand and employment,” Gosens said.

“China has been investing heavily in coal transport infrastructure for many years, precisely to reduce dependency on foreign energy. The recent turmoil in global energy markets will only strengthen Beijing’s resolve to decrease its dependency on them.”

Climate change economist and co-author of the study, Prof. Frank Jotzo, said the study findings show how energy security concerns, fracturing global security and trade, as well as climate action, are putting a squeeze on coal.

“Governments and investors would be wise to consider these findings in their medium to long-term outlook, more than the short-term gains from the current energy market volatility,” he said.

“Our findings should be of high concern to the coal industry and to Australian governments,” he said. “We need to foster alternative economic futures. Australia’s resource and energy industries have every opportunity to prosper in a low-emissions world.”

The findings of the study come after the Minister for Resources and Water, Keith Pitt, noted in September 2021 that coal will remain a significant contributor to the Australian economy according to government predictions beyond 2030.

Pitt said the latest export figures show the reports of coal’s impending death are greatly exaggerated and its future is assured well beyond 2030.

“In the three months to July this year, coal exports soared to $12.5 billion, which is a 26 per cent increase on the previous quarter,” Pitt said.

“Coal consumption throughout Asia is forecast by the International Energy Agency to grow over the next decade to meet the energy demands of countries like China, India and South Korea.

“Australia has an important role to play in meeting that demand. Coal will continue to generate billions of dollars in royalties and taxes for state and federal governments, and directly employ over 50,000 Australians,” he said.

Additionally, the Minerals Council of Australia’s Commodity Demand Outlook 2030 showed that while global thermal coal consumption is expected to decline by 2040, primarily due to reduced demand in North America and Europe as they transition to natural gas and renewables, demand for imported coal is forecast to increase 23.5 percent by 2030 throughout the Aisa-pacific.

The growth in seaborne thermal coal demand will be driven by growing economies in Asia, where low-cost electricity supplies will be needed to support expansion in energy-intensive heavy industries.

However, the report does not indicate whether this demand growth for imported thermal coal in Asia includes China.

In terms of seaborne coking coal, the report says China’s imports will rise initially and then slowly decline towards 2030 due to the increased utilisation of scrap in the steel production process.