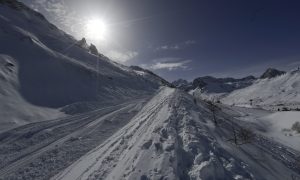 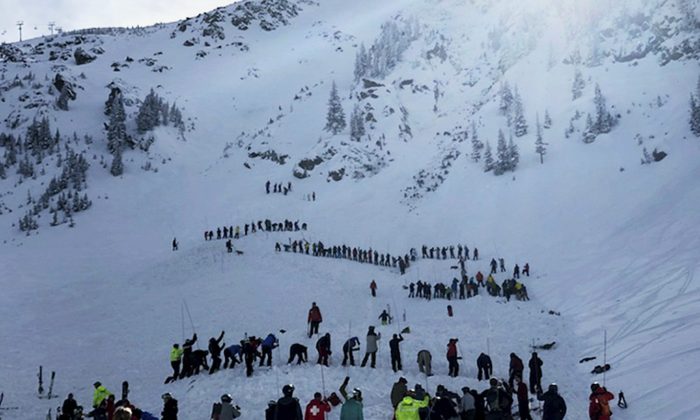 People search for victims after an avalanche buried multiple people near the highest peak of Taos Ski Valley, one of the biggest resorts in New Mexico, Thursday, Jan. 17, 2019. The avalanche rushed down the mountainside of the New Mexico ski resort on Thursday, injuring at least a few people who were pulled from the snow after a roughly 20-minute rescue effort, a resort spokesman said. (Morgan Timms/Taos News via AP)
Crime and Incidents

ALBUQUERQUE, N.M.—An avalanche rushed down a mountainside at a New Mexico ski resort on Jan. 17, injuring two people who were pulled from the snow after a roughly 20-minute rescue effort, a resort spokesman said.

The avalanche near the highest peak of Taos Ski Valley happened around 11:30 a.m., initially spurring fears among authorities that more victims may be buried on the mountain before witnesses told them they had not seen any other people on the slope when the slide began.

Still, a precautionary search of the mountain continued through much of the afternoon to ensure no other people remained trapped, said both Chris Stagg, a spokesman for Taos Ski Valley, and Bobby Lucero, the director for emergency management in Taos County.

The extent of the injuries for the two people, both males, was not immediately known. They were taken to hospitals in Albuquerque and Taos.

The avalanche happened on a stretch of mountain known as the K3 chute, where expert skiers who ride a lift to Kachina Peak can dart down a partially rock-lined run. It was unknown what triggered the avalanche, but the ski resort said an investigation was planned.

“We had checked that area for avalanche conditions this morning and enacted controls,” he said. “This is a great example that you’re never 100 percent certain.”

According to the Taos News , which was first to report on the avalanche, CPR had been given to the two people found beneath the snow.

George Brooks, the director of the nonprofit Ski New Mexico, which promotes the sport, said avalanches are fairly rare in the state and typically terrain is very well controlled. The avalanche comes as the region enjoys one of its better ski seasons in recent years after a spell of dry winters.

A series of snowstorms has moved across the Southwest since the start of the New Year, and another was expected to soon hit parts of the region after dropping heaving rain and snow in California.

“If they occur, it’s not usually when anybody is around,” Brooks said of avalanches.

Taos Ski Valley had received 2 inches (5 centimeters) of snow in the day before the avalanche and 15 inches (38 centimeters) in the week preceding it, according to its website. The spot where the avalanche happened is prone to winds that can blow up the mountain and create a cornice, allowing avalanches to occur even without a significant amount of recent snowfall, Brooks said.