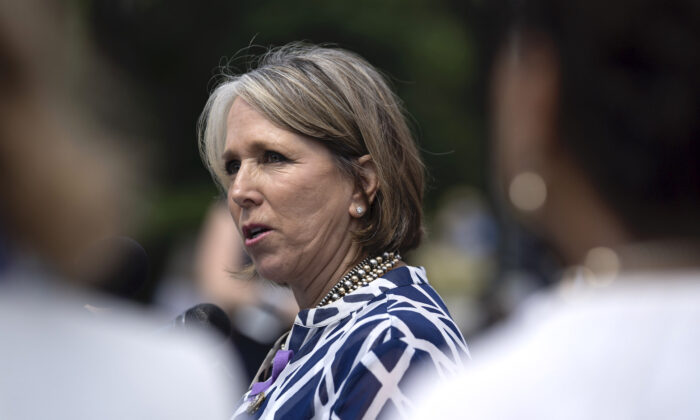 “I’m announcing … that the mask requirement for indoor settings is gone,” Grisham, a Democrat, said at a news conference at the end of a 30-day legislative session. “If you’re not vaccinated, I don’t know if it’s the best idea, but [the mask mandate] is no longer an indoor setting requirement.”

New Mexico’s top health official, acting Health and Human Services Secretary David Scrase, had on Feb. 9 told a press conference, “We all really want to stop the mask mandate, but masks are effective and the state is still in hot water.”

But upon the announcement on Thursday, Scrase took off his mask, alongside other assembled Democratic politicians and state officials.

The mandate will also be lifted for students in public schools.

Individual school districts can choose whether to keep the mask mandate, according to Whitney Holland, president of the union American Federation of Teachers New Mexico.

Scrase said later that masks will still be required at hospitals and nursing homes.

New Mexico’s now-lifted mask mandate had been imposed in August 2021. At the time, Grisham said vaccination rates weren’t increasing but COVID-19 cases were.

Senate Minority Leader Greg Baca, a Republican, said after the announcement that he was happy about the governor’s decision but that “the timing is clearly motivated by politics.”

“New Mexicans, however, will not forget the last three years simply because this is an election year,” he added.

Grisham is up for reelection in November. She said on Thursday the move is “not a political decision.”

“It’s the right time for us. We are conquering COVID and we’ll keep doing that,” she said.

New Mexico and Hawaii had been the only states that had yet to announce a date to lift their mandates just prior to Grisham’s announcement.