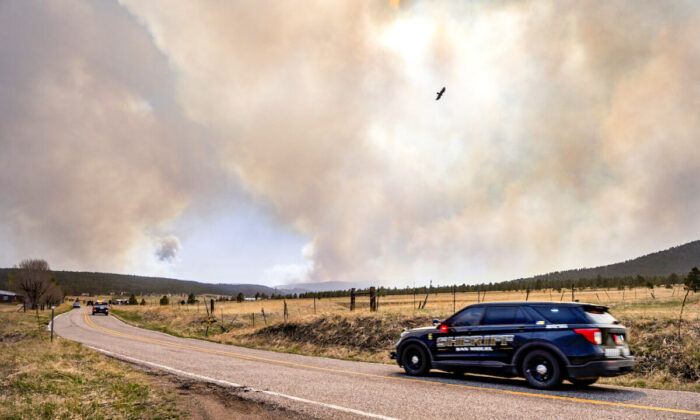 New Mexico Gov. Michelle Lujan Grisham has declared a state of emergency in five counties due to wildfires that have burned through large swaths of the drought-stricken state.

The Democratic governor declared states of emergency for Colfax, Lincoln, San Miguel, and Valencia Counties on April 22, and issued a similar declaration for Mora County on April 23 due to the fire threat.

More than 20 active wildfires were burning in at least 16 of New Mexico’s 33 counties, Grisham said during a briefing that was streamed online. “So half the state has a fire issue.”

The declarations for the five counties made $3 million available for the state’s Department of Homeland Security and Emergency Management to help counties with emergency measures, prevent additional damages, repair infrastructure, and help lessen recovery time, according to the governor’s office.

Two large fires, the Calf Canyon Fire and the Hermits Peak Fire east of Santa Fe, have merged. Together, the fires have burned over 42,300 acres, officials announced early on April 23, adding that due to the merging of the two fires, “containment has not been able to be accurately calculated.”

The extreme weather caused an uncontrolled fire line and resulted in structure loss; damage assessments are continuing, officials said. A red flag warning was issued on April 23 because of westerly winds with speeds up to 25 mph and gusts above 40 mph.

Meanwhile, the Cooks Peak fire in Mora County had burned more than 48,600 acres and was zero percent contained as of April 23, fire officials said. The cause of the fire, which began on April 17, is unknown and is under investigation.

New evacuations orders have been issued for Mora County amid a strong cold front moving across the state’s north on April 23, bringing gusty, erratic winds.

As of April 23, New Mexico had the most major wildfires burning of any state, although neighboring Arizona also had large fires, including one that burned 30 homes near Flagstaff on April 19.

Arizona Gov. Doug Ducey on April 21 declared a state of emergency for a fast-growing fire, the Tunnel Fire, in Coconino County. The fire has burned at least 21,000 acres and was 3 percent contained as of April 23.

Another fire, the Crooks Fire, located south of Prescott, Arizona, has burned more than 2,800 acres and is 5 percent contained.