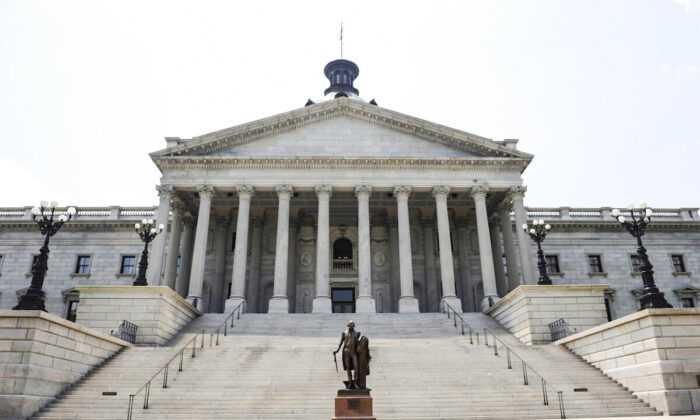 Though mayoral elections in the capital city are nonpartisan, Rickenmann is affiliated with the Republican Party.

In addition to receiving backing from Obama, Devine, a Democrat, was endorsed by House Majority Whip Jim Clyburn (D-S.C.).

Rickenmann succeeds former Mayor Stephen Benjamin, a Democrat, who did not seek a fourth term after serving 11 years.

Following Rickenmann’s win over Devine in November, Republicans said it’s evidence of a growing “red wave” that will see Republicans recapture the House during the 2022 midterms.

Sen. Rick Scott (R-Fla.), the head of the Senate GOP’s reelection arm, said that Columbia “has been led by Dem mayors for 30 years,” while Biden won by 30 points last year.

Earlier that month, Republican Glenn Youngkin defeated Democrat Terry McAuliffe in Virginia, in what some analysts said was a major victory for Republicans in a reliably blue state that hasn’t had a Republican governor for more than a decade. Biden won by 10 percentage points in the state last year.

At his swearing-in ceremony, Rickenmann said he promised clean sidewalks, streets, and schools, as well as public safety.

He alluded to the national talk of shutdowns by stating that Columbia would stay open for business and that he would work to reduce “taxes and fees that close the gap between surviving and thriving.”

“It shouldn’t take millions of dollars to take advantage of an opportunity in this city, it should only take determination and effort,” Rickenmann said.

‘No’ to Mask Mandates in Schools

When a councilman in August, Rickenmann voted against mandating masks in schools.

Benjamin had declared a state of emergency for the state capital that he said was triggered by Prisma Health Children’s Hospital in Columbia reporting that it had reached “strained capacity” with children being hospitalized with COVID-19.

Columbia City Council subsequently ratified the state of emergency during an emergency meeting mandating masks for all faculty, staff, visitors, and children in public and private schools, and daycares that instruct children from ages 2 to 14.

In the ordinance, supported by Devine, the surge of the Delta variant being a threat to unvaccinated children was cited as the impetus for the emergency declaration.

“The relaxing of social distancing, mask-wearing, and low vaccination rates, are being blamed for creating a ‘perfect storm’ that has strained capacity at Prisma Health Children’s Hospital in Columbia as more children are diagnosed with COVID-19 and other respiratory illnesses, causing crowded offices, emergency rooms, floors, and intensive care units,” according to the language of the emergency ordinance.

“If a child goes in the hospital, they automatically get tested for COVID. And they get counted as a COVID-hospitalized individual,” Fauci said. “When in fact, they may go in for a broken leg or appendicitis or something like that. So it’s overcounting the number of children who are, quote, ‘hospitalized with COVID,’ as opposed to because of COVID.”

It was a change in narrative on hospitalization rates reflecting that of a shifting stance on masks.

In March 2020, Fauci told 60 Minutes: “There’s no reason to be walking around with a mask. When you’re in the middle of an outbreak, wearing a mask might make people feel a little bit better and it might even block a droplet, but it’s not providing the perfect protection that people think that it is.”

In February 2021, the CDC issued recommendations to wear two masks.

By the fall school year, mask mandates were common in most school systems.

During the council meeting, Rickenmann said, though the council needs to do everything we can “to motivate and encourage” people to wear masks and get vaccinated, there is state legislation that prevents the council from mandating masks in schools.

Benjamin then told Rickenmann that the ordinance does not violate state law, and to not use that argument “as a decision to vote against this ordinance,” which Rickenmann later did.