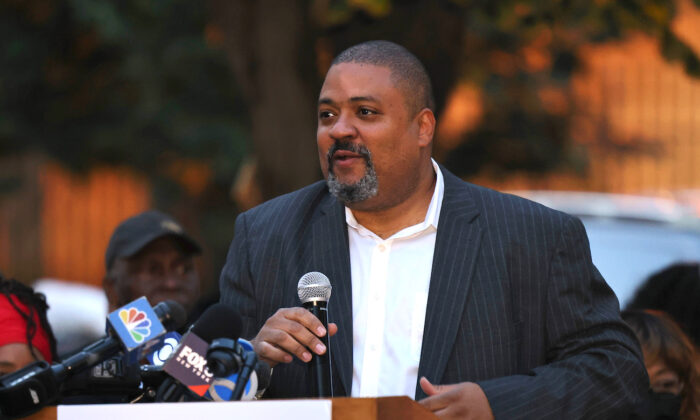 Alvin Bragg speaks during a Get Out the Vote rally at A. Philip Randolph Square in Harlem in New York City, on Nov. 1, 2021. (Michael M. Santiago/Getty Images)
New York

New Manhattan District Attorney Alvin Bragg has ordered prosecutors to stop pursuing prison sentences for many criminal cases, in a shake up of how his office will address some crimes, with just days on the job.

Bragg’s office will “not seek a carceral sentence” except in cases of homicide, domestic violence felonies, public corruption, and some sex crimes, according to memo titled “Achieving Fairness and Safety” that Bragg sent to staff on Monday.

“This rule may be excepted only in extraordinary circumstances based on a holistic analysis of the facts, criminal history, victim’s input (particularly in cases of violence or trauma), and any other information available,” the memo from Bragg, a Democrat, read.

Prosecutors must also now consider the “impacts of incarceration,” Bragg ordered, noting that it must be taken into account whether prison terms do increase public safety, if convicts will face future barriers in housing and employment, cost and race disparities, he said.

“Data, and my personal experiences, show that reserving incarceration for matters involving significant harm will make us safer,” the memo said.

The memo sets out five key goals: to invest more in diversion and alternatives to incarceration; to reduce pretrial incarceration; to focus on accountability, not sentence length; to limit youth in adult court; and to actively support those reentering society from incarceration.

The memo states that if prosecutors do seek to put a convict behind bars, the request can be for a maximum of 20 years for a determinate sentence.

“The Office shall not seek a sentence of life without parole,” Bragg instructed.

Bragg said he believes that the new charging, bail, plea, and sentencing policies will advance “the inextricably linked goals of safety and fairness.”

He also said that these policy changes will free up prosecutorial resources to focus on violent crime.

Bragg said new initiatives and policies on guns, sex crimes, hate crimes, and other matters will be announced in the coming weeks.

“While my commitment to making incarceration a matter of last resort is immutable, the path to get there through these policies will be dynamic, and, not static, and will be informed by our discussions (starting this week in the Trial Division) and our work together in the weeks and months ahead,” he told staff.

Responding to the six-page memo, New York Police Benevolent Association (PBA) president Patrick Lynch on Tuesday said the PBA is concerned about the new policies and the message these types of policies send “to both police officers and criminals on the street.”

“Police officers don’t want to be sent out to enforce laws that the district attorneys won’t prosecute,” union head Lynch said in a statement. “And there are already too many people who believe that they can commit crimes, resist arrest, interfere with police officers, and face zero consequences.”

Paul Di Giacomo, president of the Detective Endowment Association, a union that represents 5,000 New York Police Department (NYPD) detectives, accused Bragg of handing criminals “the road map to freedom from prosecution and control of our streets.”

“In Bragg’s Manhattan, you can resist arrest, deal drugs, obstruct arrests, and even carry a gun and get away with it,” said Di Giacomo.

The district attorney was sworn into office on Jan. 1, having defeated Republican Thomas Kenniff in November after winning an eight-way Democratic primary in the spring.