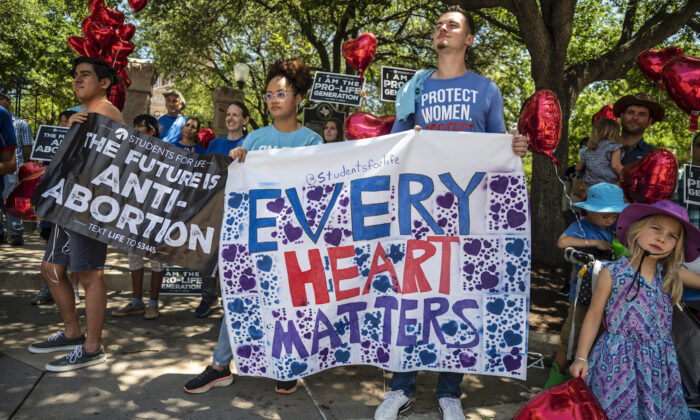 Pro-life protesters stand near the gate of the Texas state capitol on May 29, 2021. (Sergio Flores/Getty Images)
Constitutional Rights

As the political battle over abortion continues, both sides have started using private cause-of-action laws in attempts to tip the balance.

Unlike typical laws that rely on government enforcement, private cause-of-action laws don’t have a government penalty attached to them. Instead, the measures allow lawbreakers to be sued by private citizens.

In theory, private cause-of-action laws shouldn’t count as state infringements on rights, even when they penalize actions that are unconstitutional for states to prosecute. That’s because such laws are enforced by the citizens themselves.

Thus far, that method seems to allow both pro-life and pro-abortion legislators to make laws that previously would have been struck down by the Supreme Court.

In Texas, a recent law has banned abortion after the detection of a heartbeat. In California, a measure that pro-life activists say effectively outlaws photography outside abortion clinics awaits signing. Both bills rely on private cause-of-action for enforcement.

Texas’s legislation follows attempts from Georgia, Iowa, North Dakota, and others to ban the abortion of unborn babies with heartbeats.

However, the Supreme Court struck down such measures from each of those states. Because of Roe v. Wade, the court considers abortion within the first 14 weeks of pregnancy to be a constitutional right. A fetal heartbeat can be detected as early as the sixth week of pregnancy.

“Abortion is throwing away another human being’s life,” Dickson said. “My reasons for being against suicide are the same reasons I’m against abortion.”

Dickson was an early adapter of the private cause-of-action strategy implemented in the Texas measure. He leads a nationwide effort to abolish abortion using those laws, one small town at a time.

Because of Dickson’s work, 34 towns in Texas have completely outlawed abortion using laws similar to the statewide Texas legislation. Most places that approved those ordinances have less than 3,000 people. Yet in total, 350,449 Texans now live in towns that have outlawed abortion.

Thus far, the Texas law seems to be working. The Supreme Court has denied an appeal by groups that support abortion.

Some, including Holly Gatling, the executive director of South Carolina Citizens for Life, see the denial as a chance for states to decide abortion laws.

“We’re in a very, very exciting time legislatively, and with the legal issues that are going to the U.S. Supreme Court,” Gatling said. “I would venture to say that the court is leaning toward returning the issue to the states.”

Katie Glenn, government affairs counsel for Americans United for Life, said the court doesn’t yet have legal grounds to overturn the Texas law and that the future of Texas’s law is unknowable.

“You have to demonstrate that you’ve suffered harm to file a lawsuit and they haven’t demonstrated that,” Glenn said. “So the court is going to let the law go into effect.”

However, laws that dodge constitutional precedent can be a double-edged sword.

In California, legislators recently voted on a measure that could use a private enforcement mechanism against pro-life protesters. Currently, it awaits Gov. Gavin Newsom’s signature.

The legislation’s text would ban photographing abortion clinic patients, providers, and assistants for online display. If someone takes such a photo, the person photographed can sue them or bring an action to the courts seeking injunctive relief.

According to Susan Arnall, the director of outreach and engagement at the Right to Life League, the measure would effectively ban photography in public anywhere near an abortion clinic.

“The original intent of the bill was to prevent doxing of people,” Arnall said. “We all can agree on that. But they went much farther. What they’re even saying is, ‘Look, you cannot videotape.’”

Arnall said she and other pro-life protesters have had people throw eggs at them and throw knives into the ground at their feet, and they’ve faced angry counterdemonstrators as well. But videotaping those acts might soon be illegal.

If pro-life activists post a video of their protest at an abortion clinic and a patient or employee appears in a frame, they can face a lawsuit.

But because California’s law depends on private enforcement by lawsuit, it’s possible that the Supreme Court’s previous rulings on similar cases won’t apply, she said.

It’s likely that the court will decline to hear an emergency appeal, she said.

The office of California Assemblymember Rebecca Bauer-Kahan, the bill’s writer, didn’t respond to a request for comment by press time.