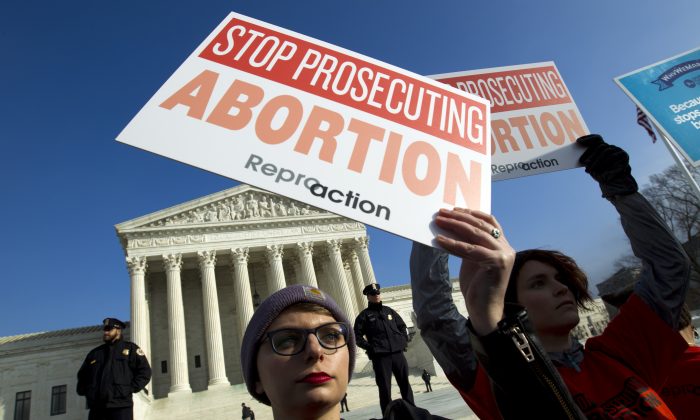 Abortion rights activists protest outside of the U.S. Supreme Court, during the March for Life in Washington. (Jose Luis Magana/AP)
Social Issues

In a victory for the pro-life cause and the rights of local government, the Michigan Court of Appeals ruled on Aug. 1 that county prosecutors could prosecute violators of a 1931 state law banning most abortions.

The statute, known as Michigan Compiled Law 750.14, was rendered moot for 49 years by the Roe v. Wade decision in 1973. The law was revived on June 24 of this year when the United States Supreme Court overturned Roe v. Wade.

It prohibits a person from administering any drug or substance or utilizing any instrument, to procure a miscarriage unless necessary to preserve the life of the mother.

A doctor performing an abortion for any other reason could be found guilty of a felony with a penalty of up to four years in prison.

Another provision of the statute outlaws the advertisement and sale of any fluid, powder, or pill designed to induce an abortion.

The overturn of Roe v. Wade, and its replacement with one of the strictest abortion laws in the country ignited a firestorm of outrage from pro-abortion forces that led to a series of legal maneuvers designed to keep the statute from coming back into effect.

A case was brought in the Michigan Court of Claims by Planned Parenthood and an individual abortion doctor asking that the state’s legal officers and all those under their control be enjoined from enforcing the 1931 statute.

The Court of Claims is a court created by the legislature to hear claims against the state.

Representing the state of Michigan in the lawsuit was Attorney General Dana Nessel, a Democrat, who has stated publicly that she disagrees with and would not enforce the 1931 law she was called upon in this case to defend.

Nessel stated that her office would continue to operate under the status quo prior to the overturning of Roe v. Wade.

On May 17, 2022, Court of Claims Judge Elizabeth Gleicher, a Democrat appointee, issued a 27-page preliminary injunction temporarily banning enforcement of MCL 750.14 to prevent harm to Planned Parenthood and the abortion doctor until their case could be tried on its merits and decided.

Attorney David Kallman of the Great Lakes Justice Center told The Epoch Times in late June, “The Court of Claims case is a sham and Nessel must be recused.”

Governor Gretchen Whitmer, a first-term Democrat seeking reelection in November, also joined the legal fray by filing suit against 13 elected county prosecuting attorneys serving in the 13 Michigan counties that have an abortion clinic to prevent them from enforcing the abortion statute.

Two of the local Republican prosecutors—Jerry Jarzynka of Jackson County and Chris Becker of Kent County—both represented by Kallman, contended the injunction preventing them from enforcing existing state law was an undue interference with their prosecutorial discretion and would keep them from doing their sworn duty.

Both Jarzynka and Becker stated that they would prosecute a violator of the 1931 law if the facts of the case presented to them merited it.

In its Aug. 1 order, the Court of Appeals stated that the office of county prosecutor was created by the state constitution and that county prosecutors are officials elected locally and paid by the local government.

They are not state officials, nor are they under the control of the attorney general.

After the ruling, Kallman told The Epoch Times, “This is a huge pro-life win. It is a great win for the rule of law and limiting judges to their proper jurisdiction. The Court of Appeals reaffirmed the independent authority of local prosecutors and upheld the Michigan Constitution.

“Michigan’s abortion statute is immediately in effect and enforceable by local prosecutors. Any claim that this order is not effective for 21 days is without merit,” he said.

On Aug. 2, a trial judge in Michigan issued an injunction against the 13 prosecutors barring them from enforcing the abortion statute. A court hearing has been set for Aug. 3 at 2:30 p.m.