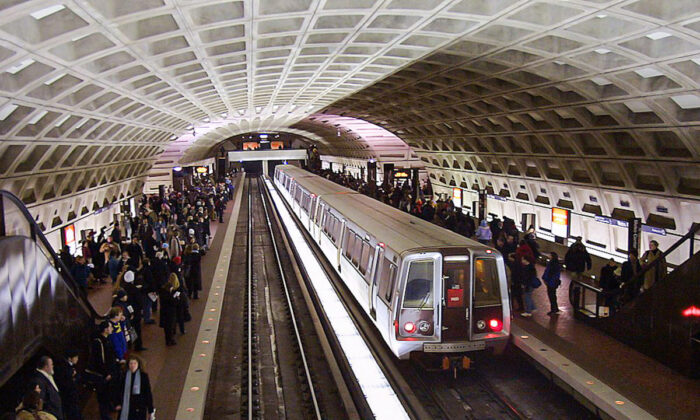 Patrons crowd the platform at the Washington Metropolitan Area Transit Authority's (WMATA) Metro Center stop in Washington, D.C. on Dec. 20, 2004. Thousands use the public transit system daily to get them in and around the D.C. area. (Karen Bleier/AFP/Getty Images)
Constitutional Rights

Gun owners in the nation’s capital are suing in hopes of being allowed to carry firearms on the region’s crime-ridden public transit system.

The lawsuit is one of several filed nationwide after the Supreme Court’s landmark ruling June 23 recognizing a constitutional right to carry firearms in public for self-defense.

The author of the 6-3 opinion, Justice Clarence Thomas, wrote in New York State Rifle and Pistol Association v. Bruen, that to ban concealed weapons in a specific place, “the government must demonstrate that the regulation is consistent with this Nation’s tradition of firearm regulation.”

The high court has been strengthening Second Amendment protections in recent years. In District of Columbia v. Heller (2008), it held that the amendment protects “the individual right to possess and carry weapons in case of confrontation,” and in McDonald v. City of Chicago (2010), that this right “is fully applicable to the States.”

On June 30, the high court followed up on the Bruen decision by reversing federal appeals court decisions that upheld gun restrictions in California, New Jersey, Maryland, and Hawaii, sending the cases back to the lower courts for a second look, as The Epoch Times reported. Courts will find it difficult to uphold the firearms laws in question.

The four men, all holders of concealed pistol carry licenses issued by Contee’s office, are regular riders of the Washington Metropolitan Transit Authority, which runs bus and subway lines in the greater Washington area, including in northern Virginia and Montgomery and Prince George’s Counties in Maryland.

But the rights of concealed pistol carry license holders are sharply limited by D.C. Code Section 7-2509.07, which prohibits carrying in many so-called sensitive areas. The law forbids licensed holders from carrying a pistol in D.C. government buildings and offices, various tourist attractions, childcare facilities, schools, hospitals, penal institutions, places where alcohol is sold or consumed, U.S. Capitol buildings, on private residential property unless authorized by the owner or tenant, and on any “public transportation vehicle, including the Metrorail transit system and its stations.”

The inclusion of many of the supposedly sensitive areas is “questionable,” especially the prohibition against carrying on the Metro, the new legal complaint (pdf) states.

Metro may have its own police force but “the overwhelming number of trains and buses lack any police presence,” the petition continues. Because the Metro system is lightly policed, “persons who need to travel around the District via the Metro are disarmed for the entirety of their journey.”

“There is not a tradition or history of prohibitions of carrying firearms on public transportation vehicles. In short there is no basis to label the Metro as a sensitive area,” the complaint states.

“I don’t think anyone at this stage can complain about [barring guns in] schools or government buildings or polling places or around the White House or the vice president’s residence,” Lyon said.

“But once you get away from that, things start to become much less certain,” said Lyon who was also one of the original plaintiffs in District of Columbia v. Heller.

Although as of press time court records showed D.C. Attorney General Karl Racine (D) had not filed a defense, his office vows to contest the lawsuit.

Racine “will continue to defend the District’s common-sense gun regulations and keep District residents safe,” the office said in a statement. “As the Supreme Court said, the Second Amendment is not a license to keep and carry any weapon in any manner for any purpose.”