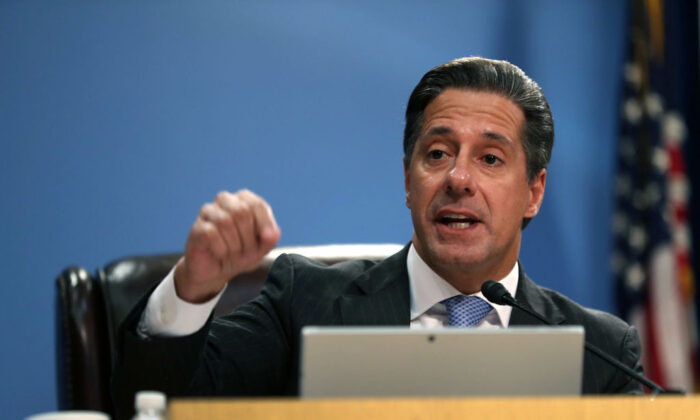 Alberto Carvalho, then Miami-Dade Schools superintendent, is seen during a school board meeting in Miami, Fla., on March 1, 2018. (Joe Raedle/Getty Images)
Southern California

LOS ANGELES—New Los Angeles Unified School District Superintendent Alberto Carvalho presented his 100-day plan to the Los Angeles City Council on April 8—saying it will include developing a five-year strategic road map that has not existed in the district for more than seven years.

“Without a strategic plan, without a north star, without a journey, how in the world do we know where we must get to and how to get there?” said Carvalho, who began his four-year LAUSD contract in February after leading the Miami-Dade County public schools since 2008.

Carvalho also said he wants to get more teachers in schools immediately, saying there are 400 open positions in “some of the most academically fragile, highest-poverty schools in this district.”

Students in those schools have been taught by substitute teachers in the absence of permanent teachers, Carvalho said, adding that there are about 3,000 qualified teachers available in the area who could fill the gaps.

In addition, the superintendent said the district will launch a new summer school program unlike anything the district has “seen in a long time, if ever.”

Carvalho also spoke about closing the achievement gap between students of different ethnicities and socioeconomic backgrounds. He said the district’s efforts will specifically target English-language learners and Black students, who he said “dwell in terms of performance.”

“This is unacceptable,” he said.

Carvalho added that the district would prioritize staffing “first rather than last” for schools with disproportionately high numbers of Black students, as well as provide additional tutorial programs and ensure that the students have access to the digital resources they need.

He also said the district would work to harness philanthropic funding in Los Angeles for a cultural arts passport initiative for students. He described the initiative as a “guarantee that every single child in Los Angeles has equitable access to artistic venues, to culture, to museums, to the outdoors. That we will do as a guarantee for students.”

Carvalho also spoke about how the school district and city officials can work together on guaranteeing “safe passage” for students, which he described as making sure “students do not have to walk through conditions that are degrading and impactful and traumatic to children.”

He said his vision for this safe passage includes “a radius of protection specific to homeless encampments around schools.”

The city council passed an ordinance last year to prohibit sleeping, sitting, camping, or obstructing the public right of way within 500 feet of “sensitive” facilities, including schools, daycare facilities, parks, and libraries.

The city can enforce chosen locations once the council passes location-specific resolutions.