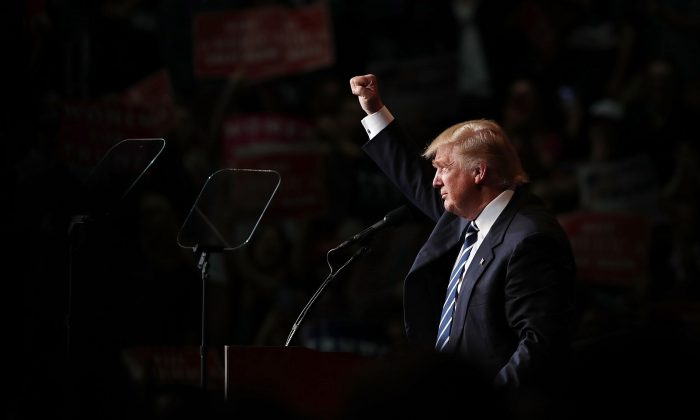 A new Los Angeles Times/USC poll, carried out the weekend after the FBI sent a letter to Congress and informed them it was re-opening an investigation into Hillary Clinton’s email server, found that Donald Trump leads his Democratic counterpart by more than 4 points.

The poll, which was conducted on Nov. 1, found the Republican nominee got 47.8 percent of respondents’ support, while Clinton netted 42.4 percent of the support.

The LA Times/USC poll tracks the same 3,000 eligible voters until Election Day, which is Tuesday, Nov. 8.

In a Washington Post/ABC News poll released on Tuesday, Trump is dead even with Clinton. The poll was conducted after FBI director James Comey’s letter. The week before, the poll showed that Trump was more than 10 points behind Clinton.

On Monday, the FBI released an archive of documents from a long-closed investigation into Bill Clinton’s 2001 presidential pardon of a fugitive financier, prompting questions from Hillary Clinton’s campaign about its timing.

The 129 pages of heavily redacted material about Bill Clinton’s presidential pardon of Marc Rich were published Monday on the FBI’s Freedom of Information Act webpage and noted on one of the bureau’s Twitter accounts Tuesday. Earlier in October, the FBI unit published historical files as far back as 1966 about Donald Trump’s father, Fred Trump.

The Clinton campaign questioned the bureau’s decision to make the file public so close to Tuesday’s election.