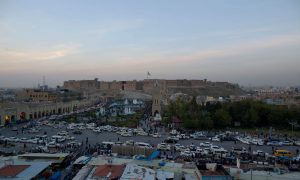 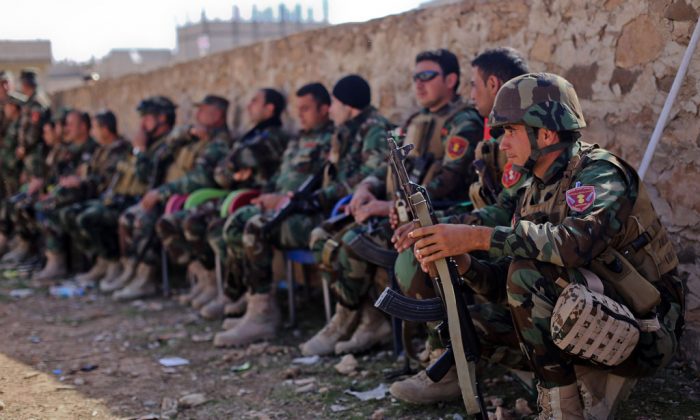 Kurdish Peshmerga fighters rest during fighting against Islamic State (IS) group on Nov. 8, 2014, in the Syrian besieged border town of Ain al-Arab (known as Kobani by the Kurds). US-led air strikes hit jihadist positions in the north and east of Syria, including an oil field, the Syrian Observatory for Human Rights said. (Ahmed Deeb/AFP/Getty Images)
Middle East

BAGHDAD—Kurdish forces, backed by U.S.-led airstrikes, launched a new offensive Wednesday targeting the Islamic State group in areas of Iraq that the extremists had captured this past summer.

The operation came as Turkish President Recep Tayyip Erdogan said details haven’t been finalized for a deal that would have his country train rebels to battle IS in Syria, where the militants also hold territory

A U.S.-led coalition is targeting IS from the sky in Iraq and Syria, supporting Western-backed Syrian rebels, Kurdish fighters and the Iraqi military on the ground. The strikes have helped halt the extremists’ move to take the Syrian city of Kobani near the Turkish border, and enabled Iraqi forces to make key advances.

The U.S. Central Command said that the U.S. and allied nations have conducted 24 airstrikes against IS militants in Iraq since Monday, a majority near the city of Kirkuk. In Syria this week, the coalition has carried out six airstrikes against IS and one against the so-called Khorasan group, which Washington says is a special cell that is plotting attacks against Western interests. Most of the strikes targeting IS in Syria took place in Kobani, according to the statement.

On Tuesday, the Kurds captured six IS-controlled buildings in Kobani and confiscated a large amount of weapons and ammunition, the Britain-based Syrian Observatory for Human Rights said.

In Iraq, the new offensive by Kurdish forces, known as the peshmerga, targeted areas in Diyala and Kirkuk provinces, said Jaber Yawer, a peshmerga spokesman. The IS extremists had seized the territory in their August offensive that saw them capture a third of Iraq.

In Diyala, the peshmerga worked with Iraqi security forces to retake the towns of Saadiya and Jalula, Yawer said. In Kirkuk, Kurdish forces backed by coalition airstrikes launched attacks to retake territory near the town of Kharbaroot, located 35 kilometers (22 miles) west of the city of Kirkuk.

The offensive began as a suicide car bomber struck in the heart of Irbil, killing at least five people, officials said. No group immediately claimed responsibility for the midday attack in the capital of the semi-autonomous Kurdish region, though authorities suspected the Islamic State group. Authorities also suspected IS in three Baghdad bombings that killed at least 10 people and wounded almost 30.

Turkey, while previously backing Syrian rebels fighting to topple President Bashar Assad, has been hesitant to aid the Kobani fight over its own fears about stoking Kurdish ambitions for an independent state. On Wednesday, Erdogan said no deal had been finalized for Turkey to train rebels under the auspices of the U.S.-led operation against IS.

“If we only talk about train and equip, we would be lying to ourselves,” Erdogan said, reiterating that overthrowing Assad must be a priority as well.

Retired Marine Gen. John Allen, the U.S. envoy for the international coalition, held talks with Turkish officials in Ankara on Wednesday but few details were released.

The IS group has declared a self-styled Islamic caliphate in areas under its control in Iraq and Syria, governing it according to its violent interpretation of Shariah law. The group has carried out mass killings targeting government security forces, ethnic minorities and others against it, including a video released Sunday with militants showing they beheaded American aid worker Peter Kassig.

Among the militants in that video were two French citizens, identified by the government in Paris as Maxime Hauchard, 22, and Mickael Dos Santos, 22. Both men were said to have left for Syria in August 2013.

France also said Wednesday it would send an additional six fighter jets to back the U.S.-led coalition. The jets will be deployed next month to Jordan, reducing the flying time to Iraq, said Col. Gilles Jaron, a French military spokesman. France already has 12 aircraft taking part in strikes in Iraq.

From The Associated Press. AP writers Bram Janssen in Irbil, Iraq, Hamza Hendawi in Baghdad, Lori Hinnant and Jamey Keaten in Paris, Ryan Lucas in Beirut and Jon Gambrell in Cairo contributed to this report.