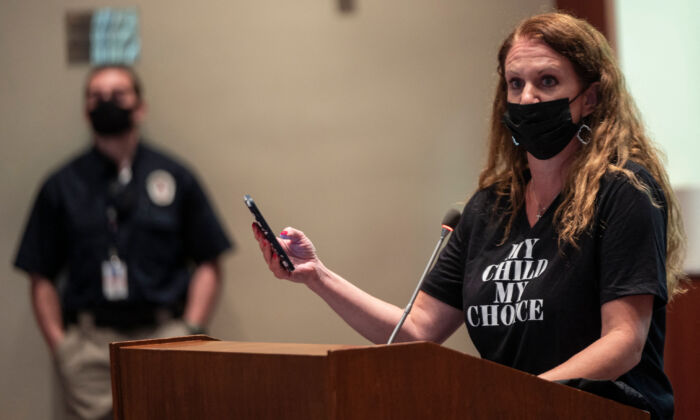 Patti Hidalgo Menders speaks out against board actions during a Loudoun County Public Schools board meeting in Ashburn, Virginia, on Oct. 12, 2021. (Andrew Caballero-Reynolds/AFP via Getty Images)
US News

There are growing rumblings against New Jersey’s new sex education curriculum that proposes lessons about gender identity for first graders.

One parents’ group slammed it as being tantamount to grooming children.

Another parent said the lesson plan was too graphic and inappropriate.

The state curriculum, slated to go into effect in September, will teach children about being non-binary and, through the use of graphic language and classroom re-enactments, that their genitals don’t necessarily dictate their true gender.

“And you might not feel like you’re a boy or a girl, but you’re a little bit of both. No matter how you feel, you’re perfectly normal!”

The curriculum also outlines proposed classroom demonstrations including one in which second graders will be asked to place post-it notes with words like “clitoris, vulva, urethra, scrotum, nipples, and vulva,” accurately on a body diagram.

“For each one, read the name on the post-it note out loud and then have the volunteer place the label on the diagram next to the body part that corresponds with it,” the lesson suggests.

“Being a boy or a girl doesn’t have to mean you have those parts, but for most people this is how their bodies are,” the lesson for second graders entitled “Understanding Our Body” begins.

“They are grooming children for a dangerous lifestyle,” Gregory Quinlan, president of Garden State Families, told The Epoch Times.

Quinlan pointed out that the elementary school sex education program promotes the use of videos by the nonprofit group AMAZE, which according to its website, “takes the awkward out of sex ed.”

Quinlan said that trans-sex education is especially “ridiculous” for young children who still have imaginary friends, pretend they are super heroes, and just want friends to play with.

“This is all about putting things into their hearts and minds of very young, very innocent children that they weren’t thinking of on their own,” he said, “it’s really quite sad.”

Supporters of the trans-sex ed curriculum, which include Planned Parenthood, Garden State Equality, and other LGBTQ+ organizations did not respond to inquiries from The Epoch Times.

In public statements, they commended the curriculum  as an overdue inclusion of gay students in sex education.

Much of the blame for the curriculum has been placed on Democratic Gov. Phil Murphy with criticism coming from his predecessor and potential presidential candidate Chris Christie, a Republican.

“I think this is just a further indication of the crazy liberal policies of my successor, Christie told Fox News.

In a statement released to The Epoch Times on April 14 on the issue, Murphy defended the trans-sex ed curriculum as “critical” for the “physical, mental, and emotional development and well-being” of students.

“It is paramount that our standards also promote inclusivity and respect for every child, including LGBTQ+ youth,” said Murphy.

However, he also told The Epoch Times that he has directed the state Department of Education to review the sex ed standards it adopted in 2020 and “provide further clarification on its age-appropriate guidelines.”

What’s for sure is that it has rapidly led to a windfall of newly-drafted bills in the Garden State explicitly fashioned after Florida’s bill, which opponents label as the “Don’t Say Gay” bill.

While the bill hasn’t been drafted yet, newly-elected NJ Senator Edward Durr (R) vowed on April 13 to introduce a bill that would, like Florida HB1557,  ban teaching sexual orientation and New Jersey kindergarteners through 6th grade.

Several other Republican lawmakers are also collaborating on legislation under the name New Jersey Parental Bill of Rights that requires full disclosure and unrestricted access for parents to any materials, events, and activities in public schools.

“I feel strongly that the reason modern American society is engaged in cancel culture and gender wars is because academia and higher education has turned racism and gender identity into an industry bent on manipulating our children,” said NJ Assemblyman Christian Barranco, the lead on the efforts.

“We need to put parents back in the position of being the primary influence in their children’s lives and bring common-sense American ideals back into our education system.”

“Parents are outraged, as they should be,” said Van Drew in a press release announcing the federal legislation on April 11.

“Parents deserve to have a say in what their children learn in school, and I would bet that it does not include teaching 6, 7, and 8-year-olds about sexual orientation. This is outrageous. This is unbelievable. This is just wrong.”

Van Drew’s proposal calls for schools to lose federal funding if they violate such conditions.

The controversial sex education curriculum was approved by the New Jersey Board of Education two years ago by an 8-4 vote, but did not gain public attention until recently when it was outlined in a handout at a school board meeting in Kinnelon, New Jersey.

The recently-disclosed details have sparked outrage among both parents and Republican lawmakers who are calling it a gateway to sexually grooming children.

Dana Leonard, a Kinnelon parent of three, told The Epoch Times that she opposes the curriculum, regardless of whether it’s on gay sex or heterosexual issues, because it is just too graphic and inappropriate.

“To see that they would consider discussing consent with a third grader is completely unethical,” Leonard said, referring to the lesson plan in the curriculum teaching kids about consenting to be touched.

The curriculum also includes lessons entitled “Learning About HIV” for 5th Grade students, “Think Outside the (Gender) Box” for 3rd Grade students, and a 4th Grade lesson plan that focuses on gender identity and sexual orientation entitled “What Is Love Anyway?”

Leonard said she is ultimately against New Jersey’s soon-to-be sex education curriculum because it is making private, family topics part of school programs.