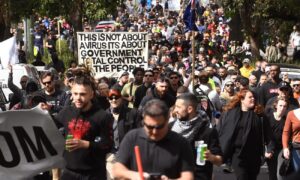 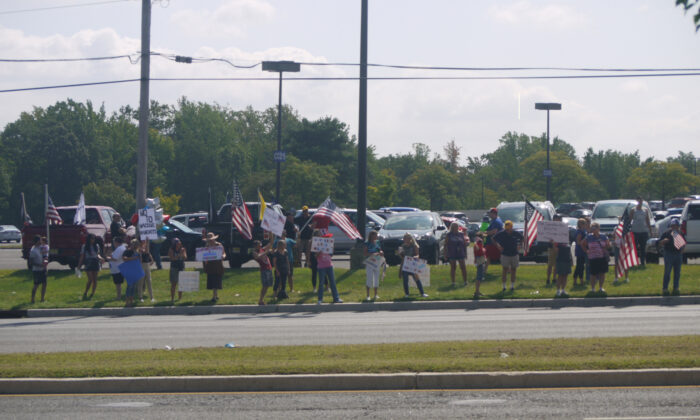 DEPTFORD, N.J.—A group of New Jerseyans gathered on Sept. 18 at a shopping area in the southern part of the state to voice their opposition to COVID-19 vaccine mandates and to advocate for constitutional rights.

A few dozen people protested by the roadside in Deptford against forced vaccination imposed by the state government by holding signs and waving American flags. Some drivers in passing cars blew horns in solidarity with the protesters.

In August, New Jersey Gov. Phil Murphy issued an executive order requiring all teachers and other employees of public, private, and parochial schools, from preschool through grade 12, to be fully vaccinated against COVID-19 by Oct. 18 or undergo periodic testing. Previously, the governor had mandated vaccination or regular testing against COVID-19 for all workers in certain state-owned and private health care facilities, or high-risk congregate settings.

A New Jersey resident who attended the rally, Christina D’Amore, told The Epoch Times that the rally wasn’t against vaccines, but about being forced to undergo a medical procedure.

“I’m here because, whether you’re a Democrat or a Republican, you should be very frightened that the government can allow a forced medical procedure done to your body. Whether it be a vaccine or another drug, we need to push back on this right now. … This is medical tyranny,” she said.

“Also, early treatment of drugs are being kept from people for COVID. … There’s absolutely no treatment. Doctors are not allowed to prescribe anything until you’re at the point that you cannot breathe. And then you’re sent to the hospital.”

Another New Jerseyan who preferred to remain anonymous because of her work situation told The Epoch Times that she and others joined the rally to protect their rights.

“We’re trying to prevent them from taking our rights away,” she said, adding that the vaccination mandate is taking away one of the peoples’ rights. “You let them take one, they take them all.”

“It’s all about our choice, our freedom of choice is being at risk; the constitutional freedoms are at risk right now,” said Rebekah Eisenman, who also attended the rally.

Other constitutional freedoms that are at risk now are freedom of speech—imperiled by censorship—and freedom of religion, she said.

“Right now, the Constitution is just at risk. And if we, if nobody stands up, and nobody says nothing at all, then everything is gone,” Eisenman said, adding that in that case, the situation would be the same as it is now in Australia.

Australia has been on and off COVID-19 lockdowns for more than a year and a half, and the country’s government plans to retain the lockdowns until at least 70 percent of the country’s near 26 million population are fully vaccinated. Currently, only about 36 percent of Australians have been vaccinated, according to the BBC.

The government of New South Wales (NSW) announced that it would grant certain freedoms once the 70 percent threshold of vaccination is reached, and more freedoms at the 80 percent mark.

For example, households in which all adults are vaccinated would be allowed to have up to five visitors. However, unvaccinated people would only be allowed to access critical retail shops, such as supermarkets.

Limits on outdoor gatherings, such as funerals and weddings, will be imposed. The number of customers at shops, beauty salons, gyms, recreational and entertainment venues will also be restricted.

“If you go to Philadelphia, they’re making you show vaccine passports in order to go there and eat, like they were doing in France. … You don’t have to show ID to vote, but you have to show your vaccine passport to eat something. So [it’s] totally wrong on so many levels,” Eisenman said.