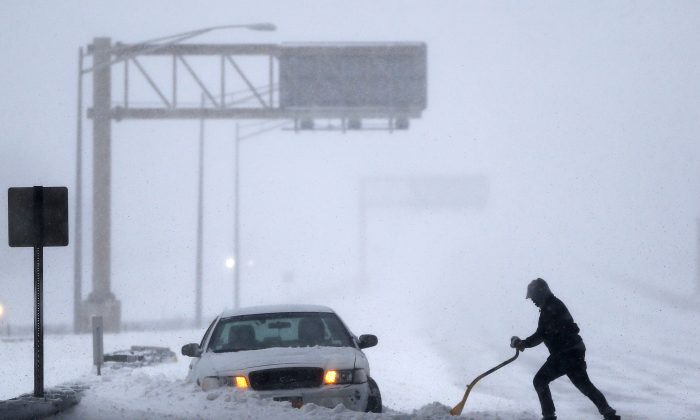 A motorist shovels snow to free up a vehicle on the New Jersey Turnpike during a snowstorm, Saturday, Jan. 23, 2016, in Port Reading, N.J. Towns across the state are hunkering down during a major snowstorm that hit overnight. (AP Photo/Julio Cortez)
US

MAHWAH, N.J.—Authorities say children returning home from school found the snow-covered body of a neighbor who apparently died while shoveling snow during the weekend storm.

Mahwah police say 64-year-old Mary Wall apparently died on Saturday but was not found until Monday afternoon. They say she was holding a shovel in her hand.

A cause of death has not been determined. But authorities say the death is not considered suspicious.

The children who found Wall initially thought someone had left a jacket in the snow. But they soon discovered it was Wall, whose body was barely visible amid the several inches of snow that had fallen.

Students in Philadelphia, Baltimore and the District of Columbia will get a second consecutive snow day as officials said schools will be closed in those cities again on Tuesday.

Officials also say government offices in the District of Columbia and Baltimore will reopen Tuesday.


Four Smithsonian museums will open Tuesday for the first time since they closed Friday at noon for the weekend snowstorm.

A spokeswoman says the National Museum of Natural History and the National Air and Space Museum will be open for their regular hours.

And fliers are continuing to face delays and cancelations in the aftermath of a massive weekend blizzard that slammed into the eastern U.S.

More than 2,500 flights were delayed or canceled Monday. That’s an improvement from Friday and Saturday.

Meanwhile, estimates of the storm’s economic impact are tame. Ryan Sweet and Adam Kamins, economists at Moody’s Analytics, peg the lost economic output at about $2.5 billion to $3 billion. That’s relatively small in the context of a $16 trillion economy.

The figure represents lost income for hourly workers and spending that was skipped. It does not include the cost of damage to roads or other infrastructure.

At least 37 people were killed in the storm. It dumped more than 20 inches on the East Coast — and 42 inches in one West Virginia town.