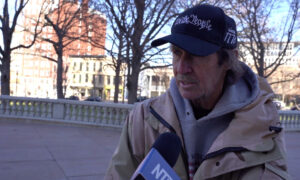 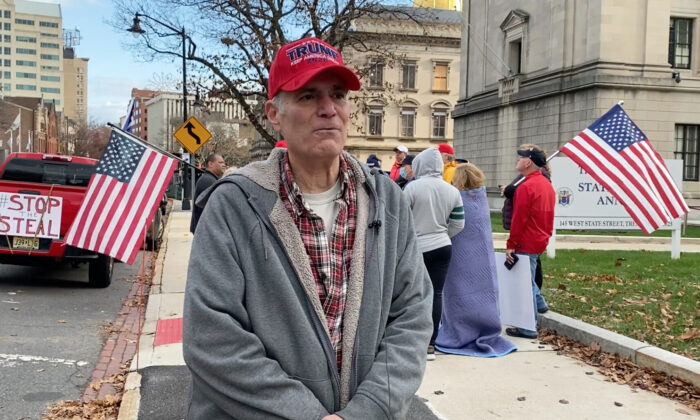 TRENTON—Dave Cantera has been organizing truck rallies to support President Donald Trump and to protest election fraud, with up to 300 cars that join in around New Jersey.

“We have to support our president because everyone else is against him,” Cantera said at a Stop the Steal rally Trenton, New Jersey in on Nov. 28, 2020. Thousands have been protesting against election fraud every Saturday since Election Day.

It takes a strong person to run for president as an outsider and make it, he added.

“I’ve been waiting for ’92 for somebody who wasn’t a politician to run for president,” Cantera said. “And thank God that Donald Trump stepped up. He already won, there is no doubt.”

“He’s not going to take us halfway through this,” he said. “The reason it’s taken so long is because the deep state has to be exposed so we can correct our country.”

“Not just the surface, we have to get to the root of the problem,” he said.

“We have to take back our country, we have to stand up and fight,” he said. “This is 1776 all over again, and it’s not the first time, this is a cyclical thing.”

We have gone away from God in all our institutions and headed in the opposite way, he added, and it has built up to the point where people have had enough.

“I just want an honest election,” he said. “I want the right man in the office and I want our voice heard. In my opinion I don’t think the election was done honestly.”

“There was a lot of irregularities in the election,” he said. Just from watching the vote counting as an average citizen might, there was already unexplained spikes for Joe Biden and the fact that he won by record margins only in contested states, Licata said, and on top of that he’s read more allegations of fraud come out and several lawsuits seem to promise more evidence.

He’s concerned that the information that is out there is muddled; Licata says he watches news media on both the left and the right but they contradict each other entirely.

“There has to be a truth in the middle,” he said. “And I don’t think we’re getting it. So I would like all these allegations to be brought in front of a judge, and let them rule on it.”

“I’d like to have the facts looked at,” he said.

Licata says there have been a lot of Chinese people at the rallies too. In similar protests across the country, people who left communist China and other socialist or former communist countries have been adding vocal support to fair and free elections.

“Hearing some of those Chinese nationals speak made me very proud to know that they came here and they’re Americans just like us,” he said. “Once you get that citizenship, we’re all equal, and we should all have one vote. One vote apiece. That’s it.”

Having been in the military for 30 years and having served overseas, Licata says he’s seen communism and it doesn’t work. He was stationed in Korea and saw North Korea turn toward communism and South Korea toward capitalism, and one is a totalitarian state today whereas the other is prosperous and lets people be happy, Licata said. In Hungary and East Germany, communism proved to be a failed experiment as well, he added.