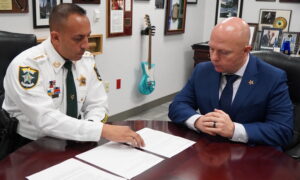 An accident this morning on the New Jersey Turnpike shut down the southbound lanes for three hour but traffic has begun moving again along the turnpike.

The crash involving a dump truck and a tractor-trailer ended with the rig jack-knifing and the dump truck in a wooded area next to the road, after which the driver needed to be rescued, according to ABC.

The southbound lanes were opened to traffic at 10:35 a.m. EDT, said the New Jersey Turnpike Authority.