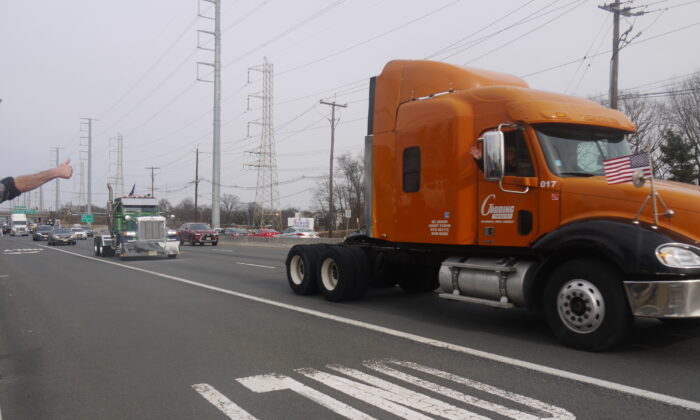 Trucks and vehicles of the New Jersey Convoy on a highway in Edison, New Jersey, on March 5, 2022. (Ella Kietlinska/The Epoch Times)
Defending America

WOODSTOWN, New Jersey—Truckers from New Jersey converged on Sunday for a sendoff rally in southwest New Jersey before heading to Washington, D.C. The convoy was commended by a congressman representing the people in that area.

Two trucker convoys–one originating in the northern part of New Jersey and another coming from the southern New Jersey–converged for a rally on the Salem County Fairgrounds in Woodstown, New Jersey, near the Delaware border.

Trucks and vehicles carried American and Canadian flags in support of the Canadian Freedom Convoy that was suppressed by the Canadian government.

The New Jersey convoy was formed to call for the restoration of people’s civil liberties and freedoms, according to a statement on the convoy’s website.

Sadaya Morris, a trucker and a volunteer for the New Jersey convoy told The Epoch Times: “When we say freedom overall, we say freedom from anything that is stopping Americans from living their normal lives and [COVID-19] mandates is one of them.”

The truckers were joined at the rally by New Jersey residents, elected officials, and musicians who performed for the truckers and their supporters.

The New Jersey convoy was formed as a nonpartisan initiative in solidarity with the global freedom convoy phenomenon, according to the statement.

“We believe that the power of politicians on all sides has been abused. We demand our voices be heard once again. We, The People, of all political affiliations and walks of life, demand the restoration of our democracy and an end to all unconstitutional mandates,” the statement said.

Congressman Jeff Van Drew (R-N.J.), representing the district that includes Woodstown, told the rally that he issued a proclamation honoring and commending the New Jersey convoy.

“The citizenry of the second congressional district, through their elected representative recognize the New Jersey convoy as an inspiration to all whose energy and achievements help us glimpse a future of hope and promise,” said the proclamation, read by the rally’s host.

New Jersey state Senator Ed Durr, a Republican who is also a career truck driver, said that truckers need to “band together and file a grievance or complaint.”

“When the wheels stop turning, the world stops turning because we bring everything to everywhere,” Durr told The Epoch Times.

Truckers should make their grievances heard but should do voice them peacefully and get somebody in representation, the senator said. “I’m trying to represent the people in Trenton,” he added.

Truckers in Canada were being forced to have a vaccine passport, Durr said. “This is not [about being] pro- or anti-vaccine. This is about personal freedom. Nobody should be able to tell you what you do with your personal health. Not the government. … It’s your health, you decide.”

Before the New Jersey convoy set off, Durr introduced a state Senate resolution (pdf) in support of the Freedom Convoys across the nation and in New Jersey with the goal of protesting ongoing government mandates related to COVID-19, according to a statement.

The Freedom Convoys are intended to send the government the message that “the pandemic is over, it’s time to get back to normal life,” Durr said in the statement. “It’s time to end all of the overbearing mandates that have taken away our rights, choices, and freedoms.”

In January, Durr introduced two bills in the state Senate to limit the governor’s powers related to the COVID-19 pandemic. The bills aim at protecting personal health information, preventing discrimination based on vaccination status, and reinforcing parental rights with regard to mask mandates.

“We’re just going to keep hammering and hammering [bills] and encourage the people to call their representatives and say these bills gotta be passed,” the senator told The Epoch Times.

Republican state Senator Michael Testa addressed a few hundred people gathered at the rally, encouraging them to keep standing up. He reminded people that they were able to avert a bill introduced in December 2019 by the state legislature controlled by Democrats that aimed to remove religious exemptions for vaccines.

At that time “we learned that when you show up, and when you speak up, and you stand up, you can shake it up,” Testa said.

“Truckers have been the voice of the people that have had no voice for many years,” Morris told The Epoch Times at the rally. “We’re fighting for one specific cause: that is to end the mandates, the emergency powers act.”

On March 3, the U.S. Senate approved a measure to end the national emergency over the pandemic, but the White House earlier that day indicated that if Congress approves the measure, President Joe Biden would veto it.

Morris said that they are “organizing truck drivers to go down to DC so they can distribute all the donations that were given to us” to every trucker that is down there.

“If we are invited to speak and voice our opinions to our political officials, then we will do so as such. We’re just waiting on the invitation,” Morris explained.

She said that truckers may not go directly to Washington, they may stay at the outskirts. “We do not want to interfere or intervene with the normality of the people that are living and working in DC,” Morris added.

Kevin Hudak, a truck driver, told The Epoch Times that he joined the convoy because of fuel price spikes and the way the American government is treating the country “is not American like.”

He said that “as soon as Biden came in office he shut down the pipeline which supplies our country with fuel oil. … They’re taking away from the hardworking Americans.”

When Canadian truckers formed a convoy to protest against COVID-19 vaccine mandates and stopped trucking for their country, it showed what truckers do for the nation, Hudak said.

“Without us, everybody would be naked, hungry, without fuel. You wouldn’t have the amenities that you have now without truckers,” he added.

“I’m hoping to get this country back to the way it was when Donald Trump was our president,” Hudak said. At that time, “we were able to buy gas for $2 a gallon and diesel fuel for $2,” he added.

Bill Pompper, a trucker who attended the rally with Hudak, said he favors Trump because he put people back to work.

Pompper’s concern is not only rising fuel price but also the higher cost of building materials such as plywood, which makes it difficult or impossible for homeowners to remodel their houses.

This is because domestic production has been shut down and the country needs to buy overseas, he added.

“We’re all family-oriented,” Pompper said as he pointed to Hudak, “That gentleman over here has got kids. … He’s got making a living,”

Hudak is also concerned that people lose their jobs or cannot be hired if they are not vaccinated.

Pompper said that his wife was told by the company that she had been working for 17 years that she would get fired if she did not get a jab, referring to the COVID-19 vaccine.

He is not allowed to visit his stepdaughter on the campus of the university where she studies because he is not vaccinated. Since her mother also has not taken a vaccine, their stepdaughter cannot talk face to face to her parents even though they pay high tuition for their daughter’s education, Pompper said. “I just feel that we should not be told to put chemicals in our body that we don’t want.”