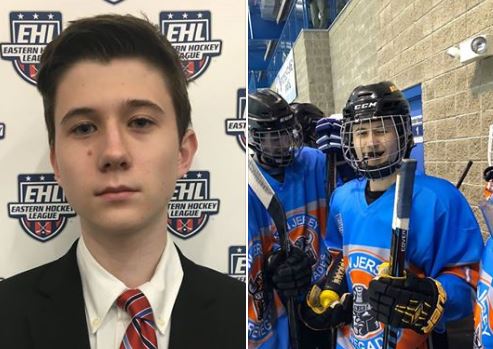 Connor Golembiewski, 17, died after falling approximately 20 feet from a ski lift at the Blue Mountain Resort in Pennsylvania on Jan. 1, 2019. (NJ Renegades/Facebook)
US News

A New Jersey teenager passed away after falling from a ski lift at Blue Mountain Resort in the Poconos.

The death at the Pennsylvania resort took place on New Year’s Day.

The teen was identified as Connor Golembiewski, 17, of Flemington, New Jersey.

The teen was rushed to St. Luke’s Hospital but was pronounced dead. The coroner said the death stemmed from multiple blunt force trauma and was an accident.

State police are investigating whether the lap bar on the lift was up or down when Golembiewski fell, Miller told The Morning Call.

Tricia Matsko, a spokeswoman for the resort, said that the accident is under investigation and declined to comment further.

According to the National Ski Areas Association (pdf), there were 37 fatal incidents during the 2017-18 season, a majority of which resulted from collisions with other skiers, trees, or manmade objects. The majority of the fatalities were male skiers under the age of 30.

Tributes poured in after the death for Golembiewski, who was a longtime hockey player.

“Connor was a Renegade starting at the age of 9 playing squirts thru bantams with the Renegades. He was a loyal, hardworking, respectful player that gave his all every time he came to the rink,” the NJ Renegades said in a statement on Facebook, sharing pictures of him.

“We wish our deepest sympathies and condolences to his family during this difficult time.”

Renegades coach Cliff Graziano added in a Facebook post, “I had the privilege to coach Connor since the age of 8. I was just on the ice with him 2 days ago doing a lesson with him and his friends. I often tell my players that I’m their coach and we’ll be friends when they are done playing for me. Yesterday I lost a friend. This is incredibly difficult to accept and understand.”

A few months ago I started all 5 of our Jr players that played together with our youth program. This was very special…

Golembiewski loved hockey so much that while the sport typically runs from August to March, he would usually spend all 12 months of the year practicing, his coach told Lehigh Valley Live.

“He didn’t change much,” Graziano said. “As a coach, the only thing you ever ask is they listen, work hard and show us respect. He did all those things his entire career.”

When the teen wasn’t playing hockey, he was often skiing.

Nick Graziano, 18, a teammate of Golembiewski’s, said that his friend had a big impact on him.

“Thing is, I don’t know if he knew that. I wish I could tell him that he made a huge impact on my life,” he told The Morning Call.

The pair met when they were 8 years old.

“He was so hard-working and he always thought of the team first,” Graziano said. “When the team was down, he was always the one telling us a win wasn’t out of reach.”

Scott Schnell, another 18-year-old teammate, recalled how the smaller teen would play fearlessly.

“You’d see him out there and he literally looked half the size of some of those guys we played against,” Schnell said. “He had no fear. He’d go in and get involved in the battles and stuff. It was honestly inspiring. If I’d see him in there, I knew I had no excuse. I’ve got to get in there, too.”