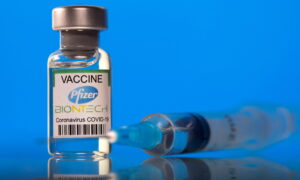 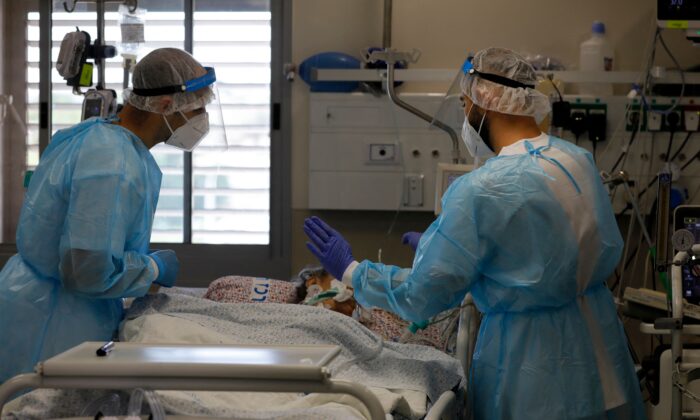 Israeli medical personnel tend to COVID-19 patients inside an isolation ward at the Ziv Medical Centre in the city of Safed in northern Israel on Aug. 12, 2021. (Jalaa Marey/AFP via Getty Images)
Vaccines & Safety

New Jersey state Sen. Joe Pennacchio announced on Wednesday he would introduce new legislation that would treat recovered COVID-19 patients the same as those who have been vaccinated.

The proposed measure will apply to any vaccine mandate or passport scheme that may be implemented, according to a statement by Pennacchio, a Republican.

The introduction of the bill addresses public concerns with President Joe Biden’s recent decision to force vaccines on many Americans, as well as concerns with governments and private businesses mandating vaccine passports for their workers and the public to participate in recreation and other daily activities, Pennacchio said in the statement.

When drafting his legislation, the senator drew from policies implemented by Israel to counter the CCP (Chinese Communist Party) virus pandemic.

According to a recent Israeli study, which has not been peer-reviewed yet, natural immunity gained from recovering from COVID-19 “was estimated to be about 13 times stronger than having two doses of the Pfizer-BioNTech vaccine,” reported News Medical.

“The science strongly suggests that people who have recovered from prior COVID-19 infections have a natural immunity that may offer a sufficient amount of protection to make additional vaccinations unnecessary,” Pennacchio said. “My new legislation would offer those with natural immunity as a result of infection the same rights and protections as those who have been vaccinated under any vaccine mandate or passport scheme that may be implemented.”

Pennacchio also cited a report by The Rockefeller University, which suggested that it is insufficient to use only antibody level to determine a person’s protection against the CCP virus, as certain memory cells developed by the human body may also “be an equal, if not better, indicator of a person’s COVID protection.”

“Unlike circulating antibodies, which peak soon after vaccination or infection only to fade a few months later, memory B cells can stick around to prevent severe disease for decades. And they evolve over time, learning to produce successively more potent ‘memory antibodies’ that are better at neutralizing the virus and more capable of adapting to variants, “the report said.

Michel Nussenzweig, professor and researcher at The Rockefeller University, cautioned in the report against natural infection: “While a natural infection may induce maturation of antibodies with broader activity than a vaccine does—a natural infection can also kill you. … A vaccine won’t do that and, in fact, protects against the risk of serious illness or death from infection.”

Pennacchio stressed in the statement that continued studies, science, and data should determine the best course of COVID-19 therapeutics and vaccination. Public health policy must be based on transparent identifiable science and data, he stated.

The Center for Disease Control and Prevention (CDC) reported that during July, 74 percent of 469 COVID-19 cases reported in Barnstable County, Massachusetts, occurred in fully vaccinated individuals. “Five of those patients who were hospitalized, four were fully vaccinated; no deaths were reported,” the CDC report said.

However, the CDC stated that “data from this report are insufficient to draw conclusions about the effectiveness of COVID-19 vaccines” against the CCP virus, including the Delta variant, during this outbreak.

“As population-level vaccination coverage increases, vaccinated persons are likely to represent a larger proportion of COVID-19 cases,” the CDC said.

The CDC acknowledged on its website that recovering from COVID-19 may offer some immunity. “Current evidence suggests that reinfection with the virus that causes COVID-19 is uncommon in the 90 days after initial infection. However, experts don’t know for sure how long this protection lasts,” the CDC said.

Earlier in September, when answering on CNN a question on whether people who recovered from COVID-19 should get vaccinated, Dr. Anthony Fauci, a top U.S. public health official, said, “I don’t have a really firm answer for you on that.”

“That’s something that we’re going to have to discuss regarding the durability of the response. The one thing that paper from Israel didn’t tell you is whether or not—as high as the protection is with natural infection—what’s the durability compared to the durability of a vaccine? So it is conceivable that you got infected, you’re protected, but you may not be protected for an indefinite period of time,” said.