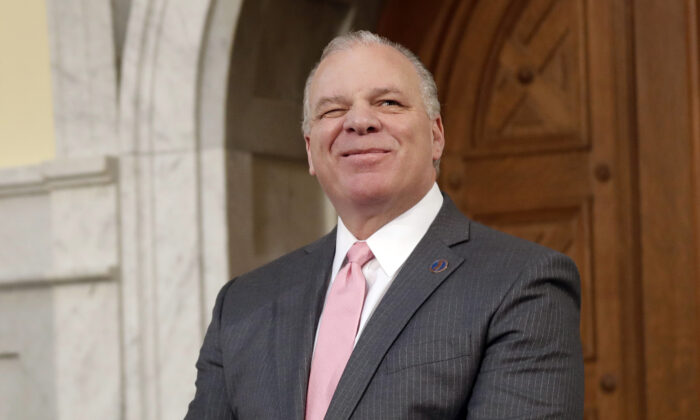 New Jersey Governor Phil Murphy extended the state’s COVID-19 emergency on Tuesday after the state Senate speaker declined to schedule voting on a bill extending it for 45 days.

On Monday, New Jersey Senate President Steve Sweeney, a Democrat, announced that a bill to extend the governor’s emergency powers in response to COVID-19 would not be voted that day, the final day of voting in the lame-duck legislative session.

The resolution to enact a 45-day extension of the Governor’s emergency powers was set to expire the next day on Jan. 11.

Governor Phil Murphy, a Democrat, declared on Tuesday in a new executive order that his prior COVID-19-related emergency order issued in March 2020 “remains in full force and effect” drawing criticism from Republican lawmakers.

New Jersey Senator Anthony Bucco (R) said in a statement that the governor’s declaration has taken the state backward.

“Despite what the governor has said, his action was not taken ‘in consultation with the Legislature.’ His own party said they weren’t consulted, and neither were Republicans. In fact, the Legislature chose to not extend his emergency powers when given the opportunity yesterday. Governor Murphy’s decision both circumvents legislative oversight and breaks his deal with his own party’s leadership.”

“We need to give people hope that life is returning to normal, not returning to one man’s rule by executive order,” Bucco added.

Three New Jersey Republican lawmakers, Senator Christopher Connors, Assemblyman Brian Rumpf, and Assemblywoman DiAnne Gove said in a joint statement: “Many of our constituents are incensed by the Governor’s heavy-handed use of emergency and executive powers. We agree and, consistent with the views of our constituents, our delegation wants a new direction for our state that promptly and effectively ends the failed policies of the past.”

Republican state Senator Michael Doherty said in a statement that Republican lawmakers made three separate attempts in the past to enact a law that would limit the governor’s emergency powers to 14 days but their efforts were blocked by Senate Democrats.

Sweeney, the longest-serving Senate President in New Jersey’s history was defeated by Edward Durr, a Republican, in the November election and adjourned the Senate on Monday.

On Jan. 1, New Jersey Governor Phil Murphy formally notified leadership in the Senate and Assembly to extend an additional 90 days the governor’s emergency powers related to responding to the COVID-19 pandemic, the disease caused by the CCP (Chinese Communist Party) virus, also known as the novel coronavirus.

I also requested a 90-day extension for a number of administrative orders, directives, and waivers that have been issued by our departments and agencies in response to the pandemic.

Republican lawmakers of both chambers of the New Jersey legislature opposed the bill and called on their colleagues in the legislature to vote against the extension.

“Although the bill has reduced the 90-day extension to a 45-day extension, every extra day the Governor’s emergency powers are in place is one day too long for New Jersey,” Senate Republican Leader Tom Kean said in a statement before the Monday session.

“We have three separate but equal branches of government: we have: the judiciary, we have the executive, we have this legislative body,” state senator Michael Testa (R) said in his remarks during the voting session on Monday,

“For the past 22 months, the State of New Jersey has been ruled solely by the executive,” Testa said.

As a result, a third of New Jersey small businesses have been shut down due to the COVID-19 pandemic, Testa said in his earlier statement.

He said in the statement he would vote against the emergency power extension and asked other lawmakers to do the same.

Republican Assemblyman Gerry Scharfenberger said in a statement on Jan. 6, that he would also vote against the bill.

“Rather than looking to extend the Governor’s emergency powers, we should be revoking the constraints that have been in place since March 2020 which, if these policies worked, we would have been over this a year and a half ago. Life has to continue and even the CDC is finally admitting such,” Scharfenberger said in a statement.

“New Jersey already lost a third of its businesses, done incalculable damage to our children’s education, lost thousands of seniors in our nursing homes, and trampled the rights of every resident in the state,” the Republican Assemblyman added.

Sweeney said in an earlier statement supporting the bill “The recent resurgence in COVID cases has imposed critical demands on our health care system that need to be addressed. This resolution will authorize the 45-day extension of administrative orders, executive directives, and guidance issued by the governor during the pandemic to address crisis conditions in our hospitals and other health care facilities.”

“The extended waivers and authorizations will grant the administration and the health care community the ability to counter the more acute and persistent problems that plague the health care system” such as staffing shortages, Sweeney said in the statement.

In June last year, New Jersey Gov. Phil Murphy signed into law a bill that ended the CCP virus pandemic-related public health emergency that had been in effect for 15 months. The legislation also extended some of the governor’s pandemic-related powers until Jan. 11, 2022.

The bill required any rules related to masks, social distancing, and gathering be no stronger than CDC guidance. However, if a substantial increase in hospitalizations, infections, or the rate of COVID-19 transmission occurs, the rules could be more restrictive, the bill stipulated.