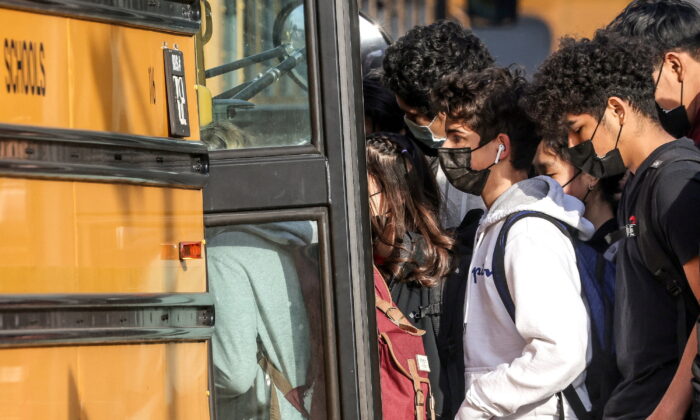 Students board a school bus outside of Washington-Liberty High School in Arlington County which is one of several school districts which sued to stop the mask-optional order by Governor Glenn Youngkin (R), in Arlington, Va., on Jan. 25, 2022. (Evelyn Hockstein/Reuters)
By Jack Phillips

“Therefore, effective Wednesday, December 21, 2022, all employees, Pre-K through grade 12 students, and visitors are required to wear face coverings in all district facilities, school grounds, and buses,” Passaic Public Schools Superintendent Sandra Diodonet said in a letter issued via Twitter. “When Passaic County is in the moderate or below range, the mask mandate will be lifted,” Diodonet wrote.

Passaic Public Schools includes 17 schools and has about 14,000 students in total. Passaic, within Passaic County, is located in northern New Jersey.

The mandate drew criticism from locals. “This is anti-science, anti-child & just plain cruel. Shame on ‘educators’ who impose restrictions on children’s learning, socialization & joy just because they can,” Twitter user Maud Maron, a Democrat who ran for Congress, wrote to the school district on Twitter.

A group that opposes COVID-19-related rules for schools and the teaching of critical race theory in classrooms similarly panned the decision this week.

“Families are still dealing with the fallout from these policies, and will be doing so for years to come … so for districts across the country to yet again unilaterally impose mask mandates on suffering children defies logic,” Parents Defending Education said in a statement in response. Different families have different levels of risk tolerance, and should anyone desire to have their children masked, they should be free to do so … but certainly not mandated.”

New Jersey’s statewide mask mandate was ended by Gov. Phil Murphy in March of this year. Recently, the Democrat governor told local media NJ.com that he doesn’t  “foresee any mandates in New Jersey unless something drastically changes.”

“I think people should just use their commonsense … if you’re not feeling well—certainly if you test positive—take yourself off the field and that to me remains the right sensible, commonsense advice,” he added. “We don’t want to mandate things that we can’t enforce and I don’t think the market is going to bear that.”

Passaic isn’t the only area in the United States that has announced mask mandates in recent days. Last week, Philadelphia’s school superintendent, Tony Watlington, confirmed that masks would be required for the first 10 days after the conclusion of the winter break.

“Many of us will be involved in quite a few social gatherings over the next few weeks,” Watlington said in an attempt to rationalize the policy.

There was also speculation that Los Angeles County could reinstate its mask policy after its chief health official, Dr. Barbara Ferrer, indicated that the rule would be brought back. However, in a news conference two weeks ago, Ferrer did not announce the mandate and recommended that people wear masks instead.

A range of studies and data have shown that children have the lowest chance of developing severe COVID-19 symptoms, being hospitalized, or dying. Data from the U.S. Centers for Disease Control and Prevention’s (CDC) weekly tracker also indicates that both the number of COVID-19 cases and deaths for the week ending on Dec. 14, 2022, are much lower than the same period last year.

Last year, a German study found that mask mandates may cause children both psychological and physical harm. Most majority of parents who responded to the survey—68 percent—reported that masking caused a range of problems for their children.