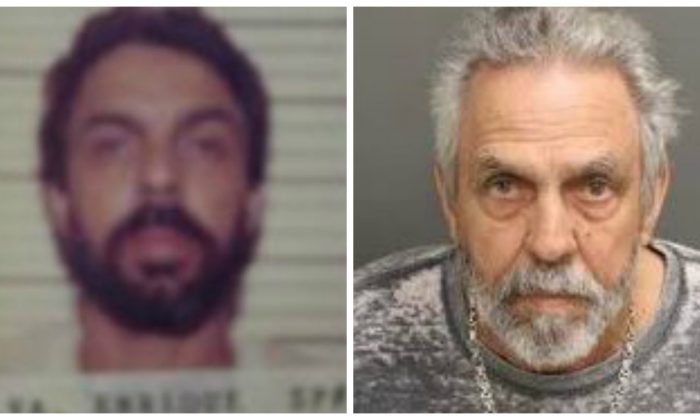 A file mugshot of Enrique Silva, and a current mugshot of Silva. (New Jersey Department of Corrections)
Crime and Incidents

A man who fled from custody in New Jersey was caught in Florida—23 years later.

Enrique Silva, now 73, was captured by U.S. Marshals after trying to flee a home in Orlando on Thursday morning, March 8, in the culmination of a Department of Correction (DOC) operation.

Silva was serving a sentence for dealing drugs at the former Riverfront State Prison in Camden when he escaped on May 16, 1995, reported the NJ Advance Media.

The search heated up in February after investigators learned the Orlando address of “a potential female acquaintance” of Silva, reported the Courier-Post.

Investigators alerted officials in Florida, who started conducting surveillance on the home.

South Jersey prison escapee is caught, 23 years laterCAMDEN – A man who ran away from custody in South Jersey couldn't flee his pursuers in Florida. Apparently, 74-year-old Enrique Silva slowed down during 23 years on the loose. Silva had been sought since May 1995, when he …

The Special Investigations Division Fugitive Unit joined and became a vital member of the United States Marshals Service’s New York/New Jersey Regional Fugitive Task Force in 2003, according to the DOC.

Congress and the U.S. Department of Justice established the task force to track down and apprehend state and local criminals who were deemed the “worst of the worst.”

“It was old-fashioned police work,” said Mike Schroeder, a spokesman for the U.S. Marshals Office. “A lot of interviews and unearthing of potential addresses. In this type of work, a lot of leads don’t pan out and (investigators) finally hit pay dirt.”

Marshals from New Jersey then went to Florida where they entered the home and captured Silva on March 8. Silvia attempted to escape from the back door, but officers were there waiting for him.

Silva is in a Florida jail and will be extradited to New Jersey pending an identity hearing.