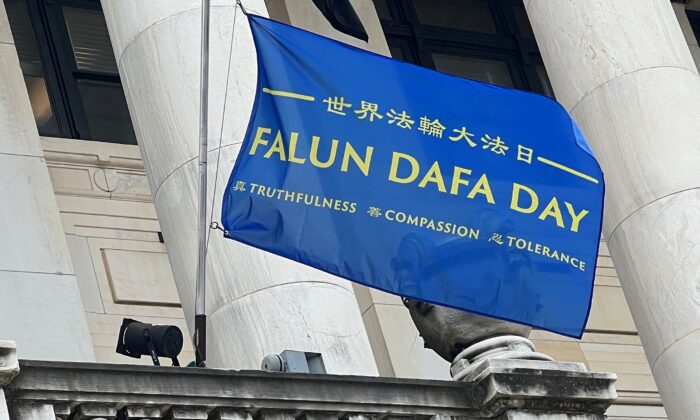 Celebrating the 30th anniversary of the introduction of Falun Dafa, a Falun Dafa Day flag was raised on the city hall of New Jersey's capital Trenton on May 12, 2022. (Pei Yu/Epoch Times)
Regional News

A blue flag that read “Falun Dafa Day” was raised at the city hall of New Jersey’s capital city, Trenton, on May 12. At the ceremony, Mayor Reed Gusciora presented a proclamation “honoring Truthfulness, Compassion and Forbearance” to New Jersey Falun Dafa Association.

A longtime supporter of Falun Dafa, Gusciora said he has celebrated Falun Dafa Day many times since his days at the State Assembly. “Falun Dafa represents liberation, freedom, spirituality, religion, and everything that’s great about the capital city,” said the mayor.

Referring to the upcoming 250th anniversary of the United States, the mayor said that “all of the ideals were celebrated in the city 250 years ago. We cherish all the ideals of Falun Dafa, and hope you have a great 30th anniversary!”

Falun Dafa, also known as Falun Gong, is an ancient mind-body practice that consists of meditative exercises and moral teachings. It was first introduced to the public in China 30 years ago on May 13, 1992, and, according to Falun Dafa Information Center, by early 1999 there were 100 million people practicing Falun Gong in China alone.

Since 1999, millions of Falun Gong practitioners have been detained inside prisons, labor camps, psychiatric brainwashing facilities, and elsewhere—while hundreds of thousands have been tortured, says the Falun Dafa Infoformation Center. There also has been evidence of the Chinese communist regime forcibly harvesting organs of Falun Gong practitioners and others, according to several independent investigations.

“Estimates from multiple separate, independent reports indicate tens of thousands (possibly hundreds of thousands) of Falun Gong practitioners may have been killed in order to extract their vital organs, which are used to fuel a booming organ transplantation business in China,” the Falun Dafa Information Center’s website reads.

Jessie Zhao, one of the event organizers said Falun Dafa practitioners are very grateful for the support.

“Over the years, we have received 235 proclamations, certificates, and letters from officials in New Jersey,” she said. “This year, we are so happy to receive support from almost 40 officials.”

In a proclamation, Rep. Donald Norcross (D-N.J.) acknowledged that since 1992, over 100 million people worldwide have practiced Falun Dafa. He also said that throughout the years, local Falun Dafa practitioners have participated in and sponsored events to share information about the practice.

Rep. Jefferson Van Drew (R-N.J.) said in his proclamation that New Jersey Falun Dafa Association is “an inspiration to all and whose energy and achievement help us glimpse a future of hope and promise.” He added that the association “has brought honor and pride to the community and to the citizens of New Jersey and the United States.”

Reps. Donald Payne Jr. (D-N.J.) and Mikie Sherrill (D-N.J.) sent Certificates of Recognition. Rep. Albio Sires (D-N.J.) also sent a letter that says “here in the Garden State, Falun Dafa has been well received.” He encouraged the practitioners to continue to promote the positive teachings of Falun Dafa in the communities.

On the state level, all 120 members of the New Jersey State Senate and General Assembly passed a Joint Legislative Resolution “acknowledging World Falun Dafa Day and commending the practitioners in New Jersey for their commitment and dedication to this advanced cultivation and practice system.” The resolution was signed by Senate President Nicholas Scutari, and Assembly Speaker Craig Coughlin.

The Essex County Board of Commissioners issued a resolution proclaiming May 13, 2022, as World Falun Dafa Day in Essex County. The resolution says that “millions around the world have experienced physical, mental and moral improvement through the practice.” The board of commissioners also acknowledged Falun Dafa’s dramatic health benefits and deeply rewarding spiritual path.

The text also commends the practitioners for their “persistent peaceful efforts to uphold human rights and dignity, which has garnered great respect from governments and citizens around the globe.”

Moreover, 32 cities from 8 counties in the Garden State joined in to celebrate this occasion. Ras Baraka, the mayor of Newark, New Jersey’s largest city by population, issued a proclamation commending Falun Dafa’s “timeless values of a healthy and peaceful mind and body empower many people of many ages.”

Jennie Sheeks, a local practitioner, attended the ceremony. Sheeks has been practicing Falun Dafa for 10 years. She works as a director of development and communication at a national non-profit.

“Falun Dafa has helped me in so many ways, as a mother, daughter, wife, employee, every aspect of my life. It helps me to navigate all the challenges of daily life in [the] modern world,” she said.

Sheeks was very excited to see the flag over the city hall.

“It’s such an exciting and wonderful time. It’s so special just to see the flag, saying Falun Dafa Day, flying in the wind.”