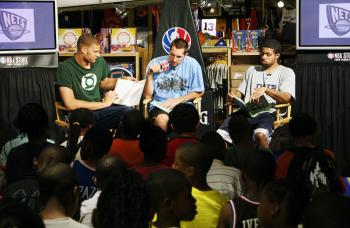 Getting pro athletes to educate kids about reading and the environment

At the platform on the lower level, Lopez, Anderson, and Douglas-Roberts took turns to tell the adventure of “William,” from “William Is Going Green” by James Martin II with James Martin III. 40 kids from the Boys and Girls Club of New Jersey took their seats and followed along as the rookies read.

“I’ve always loved reading, maybe we [rookies and kids] will pick up reading as a good hobby or something like that too.

One of the girls asked a question: ‘What does it take to play in the NBA?’ Continually, the answer really is hard work. It takes a lot of hard work and that’s pretty much everything you do,” said Lopez.

Through the Nets’ “Read to Achieve” program, the rookies and the children were drawn into the enchanting world of William, a diligent garbage truck. William is initially a smoky-white garbage truck just like all his other companions on the street. However, gradually William learns about conservation, and starts to makes friends, eventually upgradeing to a green hybrid recycling truck to help fight against global warming.

“Sometimes William worked when the sun was bright. He also worked into the night. He worked when it rained. ‘No matter the weather, no one else can do it better,’ William would shout,” read the rookies.

The story brought awareness of the major environmental concerns that are prevalent in our world today. Kids were clearly enthralled by the colorful and fascinating adventure of William, as he became more environmentally friendly.

“It’s great to be here with my fellow rookies and kinda share this experience. It’s been great,” said Anderson.

The three new Nets players were selected out from the 2008 NBA draft. Lopez, Anderson, and Douglas-Roberts are from Stanford, California, and Memphis respectively. The presence of the three rookies at the event today really showed the kids that pro athletes can also enjoy reading.

Nets’ mascot, “Mini Sly” skipped around joyfully throughout the event, creating an active and lively atmosphere to the reading program.

After the end of the book, a question period was opened for the kids to find out more about the rookies. Many kids were eagerly awaiting this precious opportunity.

How big are your muscles?”

Questions raised by the children were bringing a lot of joy and laughter to the crowd.

Followed by question period, the kids enthusiastically lined up for the three rookies to sign autographs in each of their own copies of “William Is Going Green.”

“I enjoy this sort of stuff, I really like to getting out there and meet kids,” said Lopez.

After the kids had their autographs, fans who were shopping at the NBA Store also had the opportunity to get autographs from the three rookies.