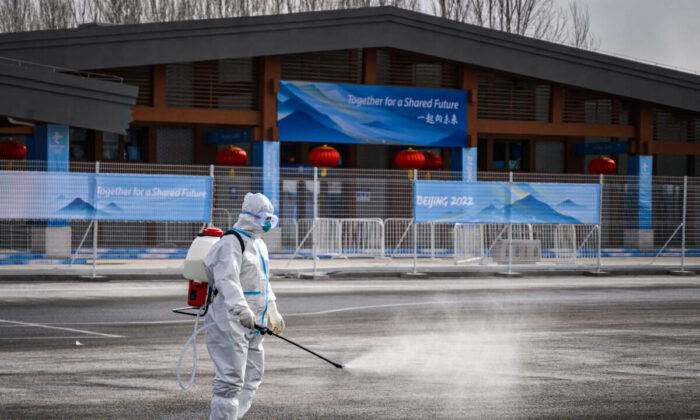 A man in hazmat suit sprays disinfectant as a preventative measure against COVID-19 in a transport hub next to Yanqing that host the alpine skiing and sliding venues ahead of the 2022 Beijing Winter Olympics on Jan. 31, 2022. (FABRICE COFFRINI/AFP via Getty Images)
Crime and Incidents

A New Jersey man has pleaded guilty to charges of fraud after selling $2.7 million worth of pesticides claiming to be registered with the Environmental Protection Agency (EPA) and as being effective against COVID-19.

Paul Andrecola, 63, of Maple Shade, New Jersey, has been charged with “one count of knowingly distributing or selling an unregistered pesticide in violation of the Federal Insecticide, Fungicide and Rodenticide Act (FIFRA), one count of wire fraud, and one count of presenting false claims to the United States,” according to the Justice Department.

Under FIFRA, the EPA must approve and register a pesticide’s claim that it can eliminate a pathogen, like COVID-19. When the CCP (Chinese Communist Party) virus spread across the globe, the EPA created a list of pesticides registered to be effective against the virus—List N: Disinfectants for Use Against SARS-CoV-2.

From March 2020—in the early stages of the pandemic when information regarding the virus was scarce— through May 2021, Andrecola made more than 150 sales of the unregistered pesticides to the tune of more than $2.7 million.

Buyers include a Delaware police department, a Virginia fire department, “a medical clinic in Georgia, a janitorial supply company in New York, a school district in Wisconsin, and numerous U.S. Government agencies,” according to the DOJ.

“Paul Andrecola’s scheme profited on the fears of the American people during the height of concerns about transmission of COVID-19,” U.S. Attorney Sellinger said in a statement.

Sentencing is scheduled for Oct. 11.

Andrecola faces a statutory maximum prison sentence of one year and a fine of up to $25,000 for the illegal sale of an unregistered pesticide. Besides this, he faces a potential penalty of 25 years in prison for wire fraud, along with fines of $250,000, twice the gross profits to Andrecola, or twice the gross loss suffered by the victims, whichever is greatest.

“As part of the plea agreement, Andrecola agreed to forfeit $2.74 million—the proceeds from the sale of the illegal product, and to make full restitution for all losses resulting from his commission of the charged crimes,” the DOJ said.