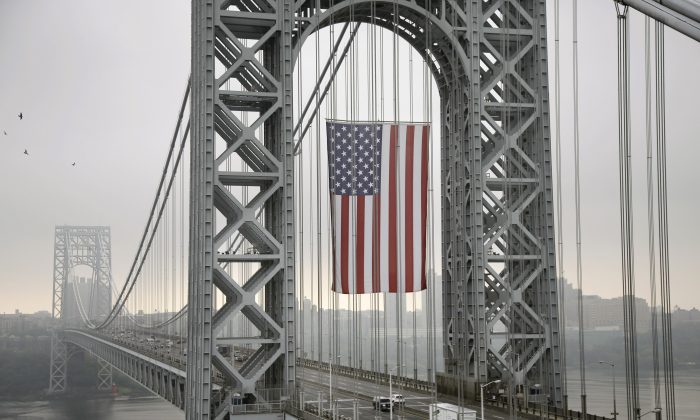 One of the largest free-flying American flags in the world flies over the George Washington Bridge during Labor Day weekend to honor working men and women across the country in Fort Lee, N.J., on Sept. 2, 2013. (AP Photo/Mel Evans)
US

NEW YORK—Authorities say a New Jersey man was arrested after racking up over 300 toll violations and failing to pay more than $20,000 in tolls and fees.

The Port Authority of New York and New Jersey said in a statement that James Clicerio, of Old Bridge, New Jersey, was arrested on Thursday after failing to pay a toll at the Outerbridge Crossing connecting Staten Island and Pert Amboy.

Officials say Clicerio was driving a white Mercury SUV when he was pulled over and an officer discovered he had five EZ Pass accounts and 323 violations.

It’s unclear whether Clicerio has an attorney who can comment on his behalf.