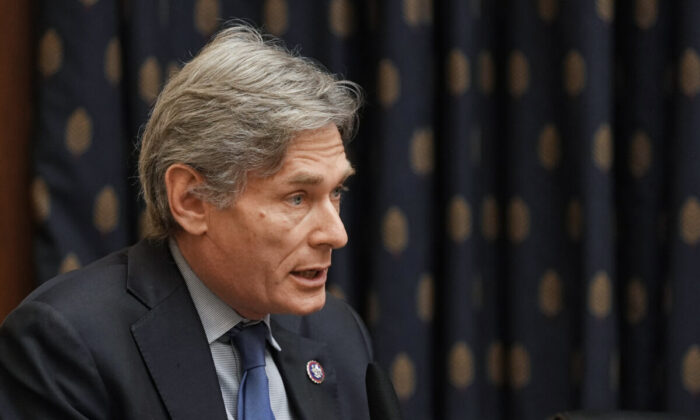 New Jersey Democratic US Rep. Tom Malinowski speaks before a House Committee in March 2021. Malinowski was among 11 New Jersey congressional incumbents, including nine Democrats, to win their June 7 primaries, but he faces a stiff challenge in winning a third term in his November contest against Republican Tom Kean, Jr. (Ken Cedeno-Pool/Getty Images)
2022 Midterm Elections

As expected, all 11 of New Jersey’s 12 congressional incumbents seeking reelection—nine Democrats and two Republicans—secured their party’s nods during the state’s June 7 primary to advance to November’s ballots.

But four sitting Democrats now await what are anticipated to be stiff challenges from Republican opponents come this fall with the GOP aiming to claw away at least two of the 10 congressional seats now held by Democrats.

Well-known and robustly financed Republican candidates in two New Jersey races could be among the nation’s most compelling congressional contests of the 2022 midterms.

Kean brushed off a ‘RINO’ label and criticism for not being conservative enough to sweep past six fellow candidates in the CD 7 GOP primary and earn a rematch of his down-to-the-wire 2020 loss by 1 percentage point to Malinowski.

With CD 7 becoming a bit redder following redistricting, Republicans like their chances come November against Malinowski, regarded by Cook Political Report as among the nation’s most vulnerable incumbent congressional Democrats.

Malinowski faced only marginal primary opposition in his primary. He was first elected in 2018, defeating Republican incumbent Rep. Leonard Lance in a district that Cook Political Report rates as “leaning” Republican.

Plenty of money will be spent in this closely-watched race. Malinowski’s campaign had a $3.65 million war chest in May and Kean’s coffers topped $1.2 million with fund-raising now heating up.

Incumbent U.S. Rep. Andy Kim (D-N.J.) is expected to face a stiff challenge from Republican Bob Healey in their November CD 3 contest. Healey was up by 28 percent in the Republican primary with 44 percent of the precincts reporting at 10:03 p.m. ET.

Kim whisked away progressive Reuven Hendler in his Democratic primary and will be the favorite to win a third term representing the district, which Cook Political Report rates as a “leaning Democratic,” in his matchup against Healey.

But it won’t be a slam dunk, as Healey is a well-known local and popular owner of Viking Group, a shipbuilding company that employs at least 1,000 people in the area.

Healey faced off against attorney and Realtor Nicholas Ferrara and Ian Smith to earn the nomination. Healey raised more than $1.15 million, including at least $260,000 from his own pocket, to finance his campaign.

Kim begins the summer campaign season with nearly $4 million in its war chest.

Three other incumbents, including a Republican, are early bets to win, but will be forced to stump for votes against competitive challengers.

In CD 2, incumbent Rep. Jeff Van Drew (D-N.J.) defeated two primary opponents and will be favored, but perhaps challenged, in his November match-up with Democrat Tim Alexander, a former prosecutor and detective.

Van Drew was elected as a Democrat in 2018 but switched parties in December 2019, winning a second term as a Republican in 2020.

He has nearly $1 million in his campaign war chest in a district that Cook Political Report rates as “safe” Republican after being a “toss-up” swing district for much of the previous decade.

Gottheimer and his $14 million in campaign funding will be up against either Republican U.S. Marine Corps Iraq-Afghanistan combat veteran Nick De Gregorio or former investment banker Frank Pallotta. The feisty CD 5 Republican primary was too close to call with only 3 percent of the votes reported at 10:07 p.m. ET.

Sherrill will be aiming for a third term in a match-up against Republican Morris County Commissioner Tayfun Selen, who was on pace to defeat former assistant Passaic County Prosecutor Paul DeGroot and three other GOP candidates in their CD 11 GOP contest.

Sherrill faced no challengers in the Democratic primary and has more than $5.6 million in her war chest to take on Selen in November.

Seven incumbents, including five Democrats, will be very heavy favorites to return to Washington, D.C., in 2023. A newcomer Democrat is also near-certain to win in November in a district that hasn’t elected a Republican since 1946.

He is the overwhelming favorite to defeat Democrat Matthew Jenkins in November to earn a 22nd term in the House.