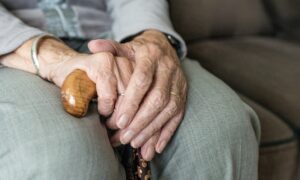 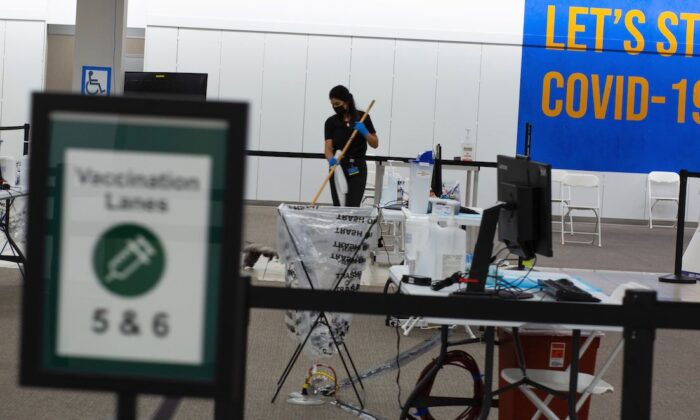 A worker cleans on the vaccination area of the Townsquare Mall in Rockaway, New Jersey on Jan. 8, 2021. (Kena Betancur/AFP via Getty Images)
Regional & Local News

A Republican candidate running for governor of New Jersey in November and challenging the incumbent Democrat told a local PAC in July that he supports medical freedom and vaccine choice while opposing mandatory vaccinations or vaccine passports.

Jack Ciattarelli, a Republican candidate for the governor of New Jersey, said in an interview with New Jersey Public Health Innovation Political Action Committee (NJPHIPAC) that he would ensure wide access to COVID-19 vaccine for New Jersey residents while also respecting each individual’s freedom to choose to get vaccinated or not.

As a governor, Ciattarelli said he would secure for New Jersey as many doses of the vaccine as possible and “then give it to the county governments to do the rollout.” There are 21 country governments in the state which act as regional service providers, he added.

The gubernatorial candidate criticized policies of the current New Jersey government which he said carried out an ineffective distribution of the COVID-19 vaccine. A missed deadline resulted in 100,000 vaccines for nursing homes not being provided, Ciattarelli said adding that vaccination mega-sites established by the state government were not run well.

Gov. Phil Murphy’s re-election campaign said in a statement that the incumbent governor “[set] up six vaccine mega-sites across the state, with vaccinations available at nearly 800 locations statewide, including community-based vaccination partnerships to reach vulnerable communities.”

The Epoch Times has reached out to Murphy’s reelection campaign for comments.

When asked whether as a governor he would institute a COVID passport or any other marker for New Jersey residents that will be used to track their medical status, Ciattarelli said, “Absolutely not. It’s an invasion of privacy. And I believe it’s discriminatory.”

New Jersey Gov. Phil Murphy announced on Tuesday that all workers in certain state-owned and private health care facilities, or high-risk congregate settings would be required to get fully vaccinated against COVID-19, the disease caused by the CCP (Chinese Communist Party) virus.

Ciattarelli said that, if elected, he would create, with the state administration, an office of the ombudsman, who “will work in the Department of Health, and their only responsibility will be to protect parental rights.”

The GOP gubernatorial candidate said that he fully supports the medical and religious exemption from mandatory vaccination. Moreover, he wants to expand it to include a philosophical exemption.

“Some people use the religious exemption wrongly, just because they don’t want to be forced to vaccinate their children,” Ciattarelli said adding that introducing a philosophical exemption would “give them another avenue.”

About roughly 2.5 percent of New Jersey families utilize a religious exemption from mandatory vaccinations according to Melanie Dragone, a director at NJPHIPAC.

Phil Swibinski, a spokesman for the New Jersey Democratic State Committee, commented in a statement on Ciattarelli’s remarks saying that Murphy’s contender will “cave into the anti-vaccine movement by drastically weakening school districts’ ability to ensure that children are vaccinated.”

“This would open the floodgates for more anti-science disinformation and make all our kids less safe, potentially even allowing dangerous diseases like measles and the mumps to re-emerge here as they have in other states with large anti-vax contingencies,” Swibinski said.

Ciattarelli said that “there should be no mask mandate for children in our schools. I think it should be completely optional, left up to parents.”

He also encouraged people to run for Board of Education positions.

“If you’re upset, run for office. I mean, that’s the way to really effectuate change. Let’s get some of our important voices on local school boards with respect to any type of mask mandate for students or the changes that public school curriculum,” he said.