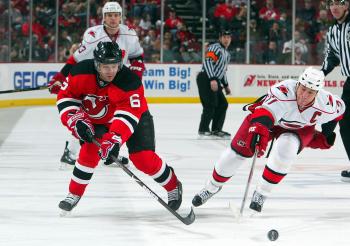 READY TO RUMBLE: The Devils will be looking to finally get past the Carolina Hurricanes in the postseason. (Jim MacIsaac/Getty Images)
Hockey

By Drew Carlucci
Print
The New Jersey Devils, once again, fell to the Carolina Hurricanes’ late game magic as the visitors got two goals with under 90 seconds remaining in the game to win Game 7 4–3.

Devils killer Jussi Jokinen tied the game 3–3 at 18:40 of the third with a quick shot past Brodeur. Jokinen was the one who scored with 0.2 seconds left in Game 4, as Devils fans won’t soon forget.

Then, Canes’ star center Eric Staal would drive the dagger into the heart of the Devils scoring the game winner at 19:28 of the third period.

The game got off to a wild start as both teams scored within the opening three minutes of the game.

The Canes would strike first as Tuomo Ruutu skated down the right side of the ice and put a quick shot by Devils defenseman Johnny Oduya, beating Marty Brodeur on his right side.

But as the fiery crowd quieted, the Devils quickly answered and tied the game 1–1 courtesy of a score by Devils captain Jamie Langenbrunner who converted a nice pass from Zach Parise.

The adrenaline pumping, both teams went back and forth and exchanged hard hits. Johnny Oduya laid a thunderous hit on Ruutu causing both players to go airborne. The hit got the crowd into the game and served as an added boost to the Devils.

With a little over six minutes remaining, and shortly after Oduya’s hit, Brendan Shanahan came down the ice and fed a sweet pass to Jay Pandolfo who slid the go-ahead-goal past Cam Ward and the Devils were up 2–1.

Pandolfo commented after the first period, “They scored the first goal but we didn’t get down and stuck with it.”

Starting the second period, the Devils let their guard down and the Canes made them pay.

After defenseman Mike Mottau coughed up the puck behind his own net and failed to clear it, the Canes’ Eric Staal fed a pass to Ray Whitney who scuffed a shot past Martin Brodeur.

Wacky goal or not, the Canes had tied the game at 2–2 and momentum seemed to start swinging their way.

But before the Canes could further silence the Jersey fans, veteran center Matt Cullen was called for a slashing penalty, putting the Devils on the power play.

During the Devils advantage, the Canes tried to attack at center ice but lost the puck to Brian Gionta who stole it and threw it across the ice where teammate Brian Rolston sent a rocket past Cam Ward’s right side, putting the Devils ahead again 3–2.

The Devils almost closed out the third period before Jokinen and Staal put on their miracle show. The home crowd was silenced and in disbelief.

Brodeur and Ward played great hockey for the entire series. But Ward outshone Brodeur in this final game.

The Hurricanes will now face the top-seeded Boston Bruins in Round 2 of the Eastern Conference Playoffs.

Down 3–1 in the series, the Washington Capitals stormed back to beat the Rangers in seven with a hard-fought 2–1 win Tuesday night.

Veteran Russian forward Sergei Fedorov fired a high wrist shot past Henrik Lundqvist late in the third period to give the Caps the win.

The Blueshirts started well as the Sean Avery–Brandon Dubinsky–Nik Antropov line combined for the game’s first goal after only five minutes of play.

The Caps tied it up on Alexander Semin’s fifth of the playoffs late in the first period.

The Rangers fought hard in the second period and kept Washington’s superior attack at bay. But the third period was all Washington’s and Federov made the difference with five minutes to go.

Washington will now face the Pittsburgh Penguins in round two.