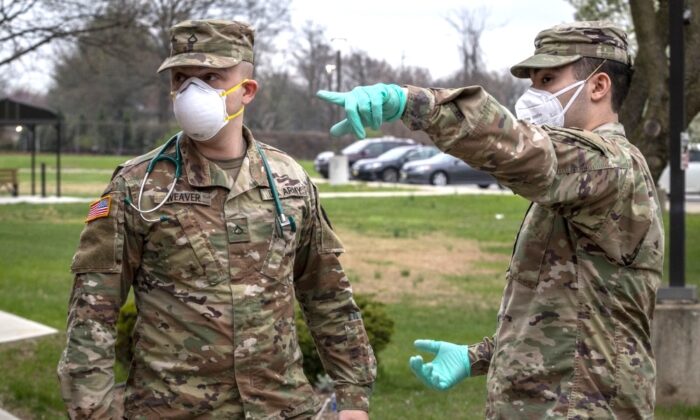 Members of The National Guard have been deployed to a veteran care home in New Jersey after an outbreak of the CCP virus has killed at least 10 residents at the facility over the past two weeks.

The New Jersey Army National Guard combat medics will assist the staff at the Paramus Veterans Memorial Home during the COVID-19 crisis, the New Jersey Department of Military and Veterans Affairs, which runs the home, said late Thursday.

“These medics are not nurses, but are fully trained similar to a civilian EMT,” the department announced. “The 40 citizen-soldiers will be invaluable in providing the best care for our veterans.”

Another 27 people are reported dead at the facility in the past two weeks.

Meanwhile, six residents have been hospitalized and 70 are ill, while dozens more are awaiting test results or have been diagnosed.

“Our population is old. Many have respiratory conditions, including chronic obstructive pulmonary disease,” Kryn Westhoven, a spokesman for the New Jersey Department of Military and Veterans Affairs, told the outlet. “There could be many reasons [the residents] died.”

He added that the nursing home stopped admitting new residents from March 23 so that rooms are free for residents with COVID-19, the disease caused by the CCP virus, to take up isolation. There are currently 285 residents at the home, which has 336 beds in total.

“Families of our residents at the homes should know we’re doing everything we possibly can to keep the residents safe,” Westhoven said.

The New Jersey Department of Military and Veterans Affairs runs two other facilities in the state—Menlo Park and Vineland veterans memorial homes. The National Guard has also sent 35 soldiers to the Menlo Park home to help relieve staff shortages amid the pandemic.

New Jersey has reported at least 51,027 cases of the CCP virus and 1,700 deaths attributable to the virus.