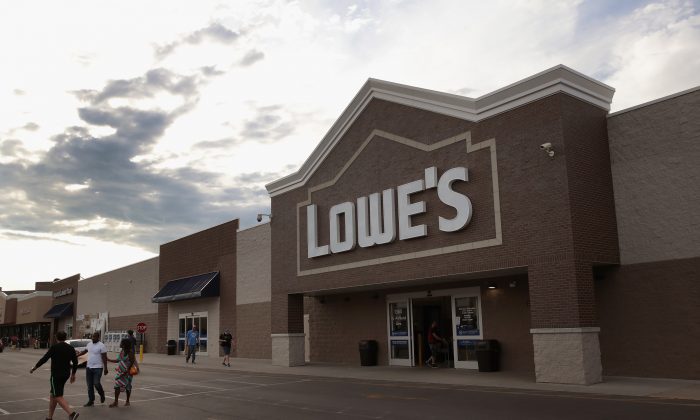 Customers shop at a Lowe's home improvement store on July 25, 2017 in Chicago, Illinois. A shortage of new single-family homes in the U.S. is causing many home owners to renovate their existing homes rather than move, which is driving up earnings and stock prices for home improvement retailers. (Photo by Scott Olson/Getty Images)
US

A New Jersey couple is facing charges for a string of thefts carried out by exploiting a weakness in a Lowe’s website. The loophole allowed them to have hundreds of thousands of dollars worth of goods shipped to their home without payment.

The couple used legally obtained gift cards in their scheme, but were discovered when Lowe’s fraud unit noticed the high volume of goods being “purchased” and looked into it.

The Brick Township couple, Romela Velazquez, 24, and husband Kimy Velazquez, 40, are facing at a raft of charges related to the fraud.

The couple managed to order and receive nearly $13,000 worth of goods before their plans were ultimately undone by their greed—their pending order of goods worth nearly $260,000 was too big to be ignored.

The massive volume of goods that the couple attempted to purchase set off alarm bells, spurring the Lowe’s Organized Retail Crime Manager to look into the matter. Lowe’s then brought the case to the attention of Brick Township Police.

On Aug 3, authorities there searched the couple’s home and recovered enough stolen merchandise to fill a 18-foot trailer.

“Detectives on scene stated the residence resembled more of a warehouse than a home,” said a release from the county prosecutor’s office.

Velazquez had allegedly posted several of the stolen items to a local Facebook Group “Buy and Sell” page, often listing the items as “New In Box” and selling them for less than half their original retail price.

Police did not provide a complete list of recovered items, but said some of the bigger ticket items recovered new in their boxes, or with their tags still on them were the following:

–  Multiple Boxes of furniture (not put together)

The couple appear to have used the scheme on other retailers as well.

Police found approximately $2,500 worth of Victoria’s Secret underwear at their home and are investigating to see if the couple targeted other retailers in the scheme.

The couple have both been charged and released to await their court dates.

Police are reminding the media and the public that criminal charges are merely accusations and that the defendants are presumed innocent until proven guilty.

A spokesperson with Lowe’s declined to comment on the incident, saying that it was still an active investigation.

She also could not say whether or not Lowe’s had made any changes to its website to ensure the problem could not be exploited by others in the future.

Kimy Velazquez has been charged with 3rd degree receipt of stolen property and 3rd degree fencing.