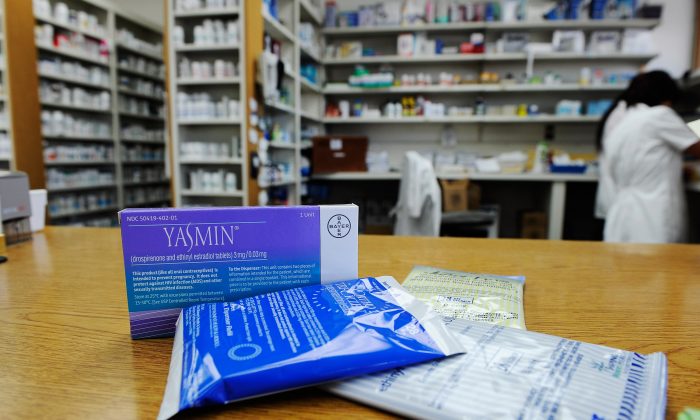 Prescription contraceptives for women sit on the counter of a drug store in Los Angeles, Calif., on Aug. 1, 2011. (Kevork Djansezian/Getty Images)
New York

TRENTON, N.J.—Legislation that would permit pharmacists to dispense hormonal contraceptives, like the pill and vaginal rings, advanced in the state Senate this week and similar legislation is pending in the Assembly.

The legislation is needed to make it easier for women to get birth control without having to make a stop at their doctor’s office, but also to reduce the number of unplanned pregnancies, lawmakers say.

“We need to remove every barrier we can that prevents women from getting access to contraception,” said Democratic state Sen. Shirley Turner, who authored the bill. “We do not want unplanned pregnancies, which if we can do that, that will eliminate the need for abortions.”

More than half of all pregnancies in New Jersey were unintended in 2010, according to a study from the Guttmacher Institute from 2015, which determined women’s intentions based on surveys. In 2010, that amounted to 97,000 unintended pregnancies, the Centers for Disease Control said, citing the Guttmacher report.

New Jersey had an abortion ratio, which measures the number of abortions per 100 live births or abortions, of 55, the report says. That’s higher than any state but New York.

Lawmakers also say the bill is a matter of convenience for women.

“More women are working and handling the everyday demands of life,” Turner said “Fitting a doctor’s appointment into their day is just not always possible.”

The proposed legislation requires the state Board of Pharmacy and Board of Medical Examiners in consultation with the American Congress of Obstetricians and Gynecologists and the New Jersey Pharmacists Association to establish a set of procedures for prescribing and dispending the contraceptives.

The legislation would also require women to use a self-screening tool to identify any potential risks.

Under the bill, health insurers that provide benefits for prescription female contraception must also cover the over-the-counter contraceptives.

John Tomicki, of the League of American Families, which represents members with anti-abortion views, said the bill would not accomplish reducing abortions.

“You’re starting to micromanage this issue,” he said. “You’re dealing with somebody who is sexually active. They should see a doctor.”