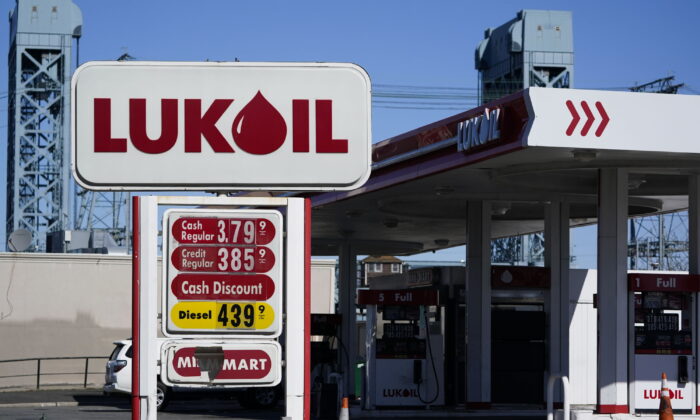 The Newark City Council, in an 8-0 vote on Wednesday approved suspending licenses of two Lukoil gas stations. Lukoil is one of the largest oil producers in Russia and reportedly has ties to Russian oligarchs.

“This is a step on the city side to do what the rest of the world is doing to impose some pressure on Russia,” Anibal Ramos, a member of the city council, said during the hearing, according to the Reuters news agency.

However, the Lukoil stations are franchises owned by locals, not Russians, and they employ mostly New Jersey residents, according to The Associated Press. And the gasoline sold at the stations comes from a local Phillips 66 refinery.

Roger Verma, a New Jersey resident, told AP that he’s owned the franchise of one of the Newark stations since 2005, adding that the city council decision might put him out of business.

“Let me be clear that I stand with Ukraine and I’m fully in support of Russian sanctions,” Verma told AP Wednesday in front of Newark’s City Hall. “But I’m baffled and confused how people sitting in these positions without having any of their facts together and without having full knowledge of how things are done can introduce and change laws and change people’s lives just like that.”

Malamine Sylla, who works at the Lukoil franchise on McCarter Highway in Newark, told NJ Advance Media that she is now likely out of a job.

Sal Resalvato, the head of the New Jersey Gasoline and Convenience Store Association, told the outlet the move is possibly illegal. “These guys are not Russia,” he said, referring to the two stations.

Lukoil, meanwhile, issued a statement on its website about the Russia-Ukraine conflict, calling for a ceasefire.

“The Board of Directors of LUKOIL expresses herewith its deepest concerns about the tragic events in Ukraine. Calling for the soonest termination of the armed conflict, we express our sincere empathy for all victims, who are affected by this tragedy,” the firm said. “We strongly support a lasting ceasefire and a settlement of problems through serious negotiations and diplomacy.”

Ramos told AP that the license suspension in Newark is meant to be temporary, adding that he’s received calls from employers offering to provide jobs to gas station workers who might be laid off.