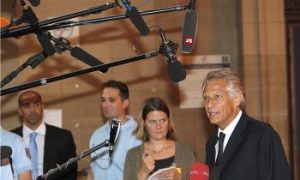 New IT Agreement Between City and Microsoft

Bloomberg was joined by Microsoft CEO Steve Ballmer to announce a major agreement between the city and Microsoft.

“By … consolidating dozens of separate city agency license agreements into a single one and paying for software based on use, we'll save $50 million over the next five years,” the mayor said.

Microsoft will provide access to its Internet-based computing services (cloud computing), which will allow programmers to create new software applications and share them between different agencies online, thereby reducing the need to buy additional hardware. The programs will also be updated instantly when newer versions are released. In addition, the services will enable online conferencing and allow multiple employees to work on the same documents simultaneously.

“This partnership provides the latest in operating system, server, and development tools, laying a foundation for greater innovation and infrastructure modernization,” Ballmer said.