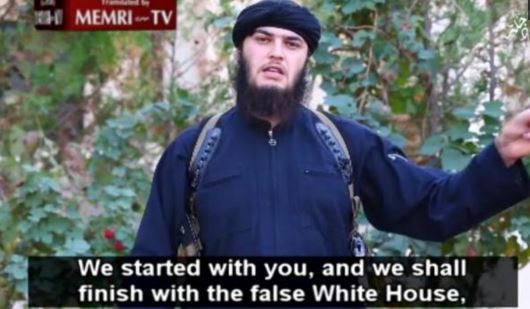 An unnamed jihadi threatens his enemies, vowing to “roast them with explosive belts and car bombs.”

One of the Islamic State members also said the group wants to burn down the White House.

“We started with [France] and we shall finish with the false White House, which we shall render black with our fire,” one of the extremists said.

“We shall blow it up like we blew up the false idols in this good lands.”

The first terrorist taunted French President Francois Hollande, saying more attacks on Paris are coming and that the terrorists want to kill Hollande himself.

“What do they expect from the nation of Islam, other than more of these strikes?”

The threats came after French police broke up a terrorist cell reportedly planning an attack on La Defense, the Paris business district.

Italian authorities later confirmed they were warned and assessing the threats.

The Middle East Research Institute says the new video was filmed near Baghdad in Iraq, in the Dijlah province which ISIS currently controls.

It also came soon after the terror group released a video threatening to bomb Times Square in New York City.

But many officials are telling citizens to live their lives without fear to oppose the terrorists, including New York City Mayor Bill de Blasio.

“If our society shuts down, the terrorists have won without ever coming here in any force,” he said. “And we are not going to allow them to win.”