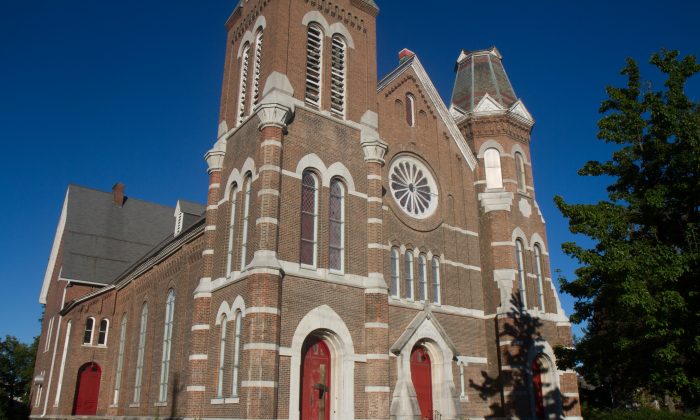 The Deerpark Reformed Church in Port Jervis on Sept. 12, 2016. The church is going to be the new site of the Port Jervis warming center from December to April. (Holly Kellum/Epoch Times)
New York

For Anne Horsham, a volunteer at Empowering Port Jervis, the new Tri-State Interfaith Council is nothing short of a gift from God and its willingness to take on the city’s warming shelter an answer to her prayers.

Empowering Port Jervis, a community center run by volunteers and funded by civil rights attorney Michael Sussman, has opened its doors for the past three winters in response to the need for a shelter for the homeless during the coldest months of the year.

While it saved people from sleeping out in the elements and potentially dying from the cold, Empowering was never insured as a temporary shelter, and it suffered from a lack of volunteers for the overnight shifts and to coordinate all the warming center supplies.

Each year, Horsham hoped for more involvement from the community, particularly the faith community, and an Empowering volunteer would go to the local places of worship to ask people for help.

They started reaching out to houses of worship in the tri-state area, and eventually formed the Tri-State Interfaith council, which has a fluid membership of about a dozen houses of worship, and representatives from regional nonprofits and local governments.

After meeting regularly since February, they announced on Sept. 8 that they had secured a 4-month insurance plan for a warming center in the basement of the Deerpark Reformed Church for up to 10 people.

“Which was not an easy thing to do,” Pearce said. “Many insurance companies [were] not willing to write a policy.”

They plan to have it open from Dec. 1 to April 1, but if there’s a need to open it sooner or keep it open later, Pearce said they wouldn’t rule out extending the timeframe.

There are about 12 churches in the tri-state area that Pearce says he is counting on to chip in for the $3,000 insurance plan and the tentative $3,000 to $4,000 budget for things like utilities and toiletries.

They are also accepting outside donations, he said, as well as support in the form of donated food and volunteers who can stay with the guests overnight.

Horsham said when she was involved in the warming center, they tried to schedule 60 volunteers so that people only had to do it once a month in shifts of two volunteers each night. Because they were always short, she said, people were having to do it twice a week, and they were getting burned out.

Last year, Empowering brought in a social worker as a paid coordinator for the warming center because it became too much for the volunteers to do by themselves.

The Tri-State Interfaith Council may consider doing this in future years, Pearce said, but for now, it’s an extra expense they don’t want to take on.  Instead, they will divvy the tasks of a coordinator up among volunteers.

“At this point we’re at the beginning of something really special just having come together in February [and] being all committed to this project,” he said. “Down the road, it’s certainly possible.”

The Council is having their next meeting on Oct. 3 at St. Peter’s Lutheran Church in Port Jervis at 7 p.m. For more information, Pearce can be reached at zkpearce@live.com or 845-741-2639.