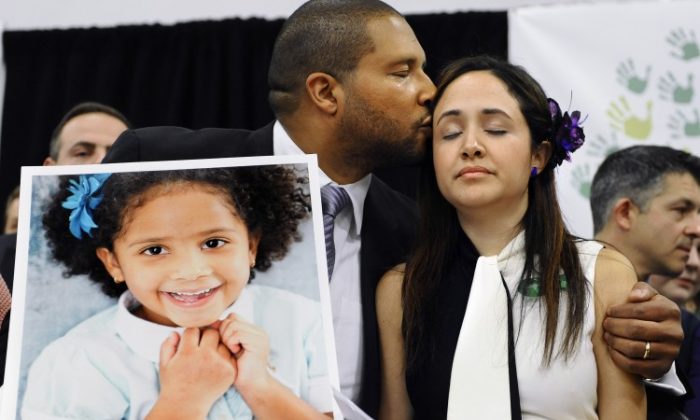 Jimmy Greene, left, kisses his wife Nelba Marquez-Greene as he holds a portrait of their daughter, Sandy Hook School shooting victim Ana Marquez-Greene, at a news conference at Edmond Town Hall in Newtown, Conn in this file photo. (AP Photo/Jessica Hill)
US

Prosecutors investigating the Newtown shootings have painted a more detailed picture of events that day.

NEW HAVEN, Conn. (AP) — The Connecticut prosecutor leading the investigation into the Newtown school shooting says the gunman killed the 26 victims and took his own life within five minutes of shooting his way into the building.

State’s Attorney Stephen J. Sedensky III says Lanza killed all the victims inside Sandy Hook Elementary School with a Bushmaster .223-caliber rifle before taking his own life with a Glock 10 mm handgun. He says Lanza also had another loaded handgun with him inside the school as well as three, 30-round magazines for the Bushmaster.

A loaded 12-gauge shotgun was also found in the passenger compartment of the car Lanza drove to the school containing 70 shotgun rounds.

The Epoch Times publishes in 35 countries and in 21 languages. Subscribe to our e-newsletter.
TOP NEWS