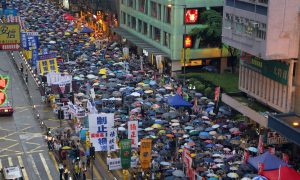 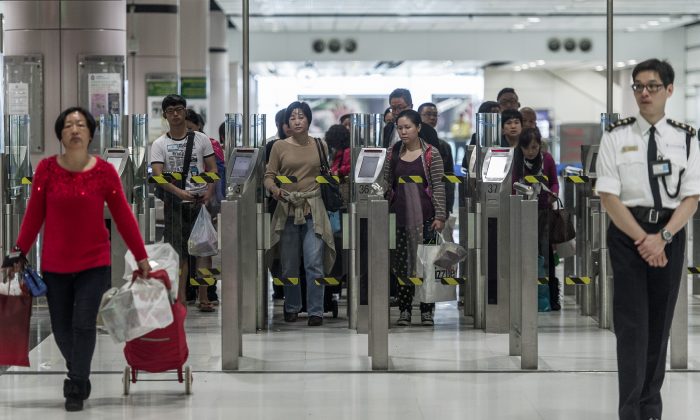 People proceed to an immigration checkpoint at a border crossing point with mainland China in Hong Kong on March 1, 2013. New visa regulations that go into effect on Sept. 1 will make crossing from Hong Kong to the mainland less convenient for foreign business people. (Philippe Lopez/AFP/Getty Images)
China

The People’s Republic of China will adopt a new immigration law on Sept. 1, which will affect Hong Kong’s usefulness as an international hub for business. European and American businessmen have been able to enter mainland China with minimal fuss regarding their visas, but the change will make this process more difficult.

The Chinese-language broadcast of Deutsche Welle reported that the stricter visa immigration law will result in a longer visa processing time and a shorter stay on the mainland for foreigners.

German business people in Hong Kong have complained that the quick and simple expedited visa has already been canceled, and the red tape has affected them.

According to reports by mainland media outlets, the new law will add an additional four categories, plus introduce changes in visa application, extension, and renewal.

A human biometric visa system, which will store data on foreign visitors including fingerprints, photos of the face, and other biological information, will be used to verify the identities of visa holders.

The new law stresses the importance for certification of the visa invitation and the candidate’s interview.

Hong Kong has been a convenient transit point into China for North American and European business people, as they could previously stay in Hong Kong for up to 90 days without a visa, and apply for a six-month or one-year stay on the mainland.

As the new law goes into effect, foreign visitors will find it difficult to transit through Hong Kong as a short cut to China.

The German Focus Magazine reported on a German businessman who had previously planned to go to Shanghai for an exhibition. The original plan called for a 10-day stay in China, and from previous experiences he expected the transit from Hong Kong to Shanghai would only take one day.

However, the new law forced him to wait for six days in Hong Kong, and in the end he was only able to spend three days in China.

The European Chamber of Commerce in Beijing cites this as another example of the vagaries of the legal system of China, with the results being inconvenience to foreign business people.

Translation by Michelle Tsun. Written in English by Christine Ford.