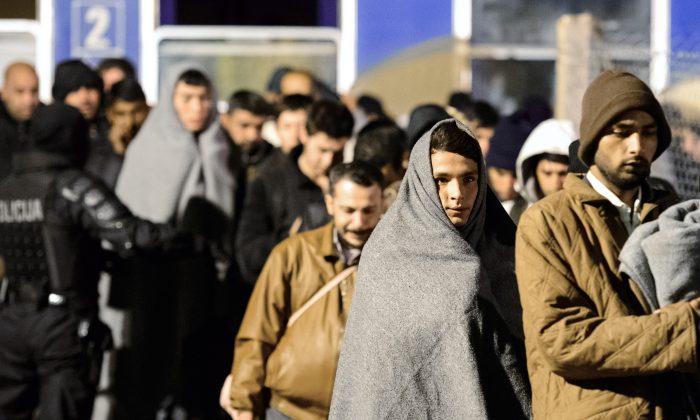 A man wears a blanket as migrants and refugees walk towards a refugee center in Sentilj, after arriving by train on November 4, 2015. (Jure Makovec/AFP/Getty Images)
Europe

AMMAN, Jordan—Bold new ideas for helping Syrian refugees and their overburdened Middle Eastern host countries are gaining traction among international donors, shocked into action by this year’s migration of hundreds of thousands of desperate Syrians to Europe.

Rather than struggling to gather humanitarian aid for refugees, the plans center around investing billions of dollars, much of it to be raised on financial markets. The money would go for development in countries such as Jordan and Lebanon to improve lives for both their own populations and refugees.

More controversial is a demand by some in the aid community that, in return for such a “Mideast Marshall Plan,” Jordan and Lebanon must allow Syrian refugees to work, integrating them more into society. The host countries, however, point to high domestic unemployment in arguing they cannot put large numbers of refugees to work legally.

“We need to be ambitious,” the regional chief of the World Bank, Ferid Belhaj, told The Associated Press. “Development is the key.”

The need for alternative plans may have become more urgent, with the Paris terror attacks further heating the debate over Europe’s immigration policy. A Syrian passport, processed in Greece and registered in the Balkan countries, was found near one of the Paris suicide bombers, raising the possibility one of the assailants may have crossed into Europe with refugees fleeing Syria.

The mass influx of Syrians to Europe has been driven by increasingly unbearable conditions in Jordan, Iraq, Turkey and Lebanon. That has drawn attention to long-ignored warnings that the traditional aid approach has fallen short in the most devastating refugee crisis in a generation, said Belhaj and others.

Under the traditional approach, the U.N. and other international agencies are the main pillar of care for refugees, either by financing camps to house them or by providing them food aid and stipends to live off of.

But donor funds are waning as the Syrian refugee crisis drags on with no end in sight for a war now in its fifth year. The year’s aid appeal of $4.5 billion for more than 4 million refugees and host nations is less than half funded. Aid agencies have had to cut back drastically on food and cash assistance.

A group of seven international aid groups, led by the Norwegian Refugee Council, called for a “new deal” between donors and hosts.

It would entail a massive international investment plan in return for the host countries allowing refugees to work, giving them the chance to support themselves.

Aid programs are “going nowhere at the moment,” Jan Egeland, head of the Norwegian Refugee Council, said last week. “The only thing we have is a half-hearted emergency relief plan that is not nearly enough to meet the needs of the refugees.”

Under the proposal, the refugee host governments “say, ‘yes you can work, yes you can contribute to our economy, as we also get our own population into this Marshall Plan of reconstruction’,” said Egeland, a former U.N. emergency relief coordinator.

Separately, the World Bank is working on new ideas for raising billions of dollars for large-scale investments.

The plan aims to help host countries build infrastructure, right their economies and deal with the steep costs from the refugee population. Eventually, it would expand to rebuild war-stricken Syria, Libya and Yemen. The bank estimates it will cost $170 billion over 10 years to rebuild Syria and another $100 billion to rebuild Libya.

“Frankly, those amounts … are not available in terms of grant money today,” Belhaj said.

Instead, large sums would be raised on financial markets.

The World Bank would issue special bonds guaranteed by the donors. Host countries would also be able to borrow large sums from the bank, with donors paying most or all of the interest.

Jordan and Lebanon say they need massive aid to build new schools and new housing and overhaul dilapidated water and electricity systems, all now overwhelmed by their increased population.

Belhaj said “one needs to find a creative ways to make sure these refugees get access to economic activity” in coordination with the host countries.

But, he said, it’s not realistic to impose the condition that the hosts allow Syrian refugees to work. Forcing the countries to absorb them into the job market before development money starts to work would be too much, he said.

“We cannot impose anything.” he said.

Egeland argued that the trade-off must be spelled out from the start.

Russia Calls for a New Syrian Constitution in 18 Months

“The host governments are scared, really … They are afraid to take (refugees) into their economy, which I think is wrong,” he said. “They could contribute to economic growth and job creation if there is international investment in parallel.”

Jordan has seen frictions between poor Jordanians and Syrian refugees who compete for scarce resources. Syrians working illegally in construction, agriculture and other sectors have pushed down wages, while rents in poor neighborhoods have risen sharply as refugees flooded in.

The World Bank plans were first proposed last month at a meeting in Lima, Peru, attended by the U.N. chief, top World Bank officials and representatives of the Islamic Development Bank.

Details are to be worked out by early next year, said Belhaj. “There was very broad support for those initiatives … especially on the ones related to the refugees.”

The Syria refugee crisis is also a central issue at the summit that began Sunday in Turkey of the G-20, or leaders of countries with some of the world’s largest economies.

In a statement, the groups aid the G-20 must go “beyond the provision of humanitarian assistance to include medium- to long-term economic support” for refugees and host countries.

The refugees’ exodus to Europe could serve as a catalyst for change, Egeland said.

“They want to be close to their homes,” he said of the refugees. “But today, we only provide them (with) desperate choices. No work, no future, no family, no hope here. That is not enough. Invest in hope for them, invest in development, invest in work.”