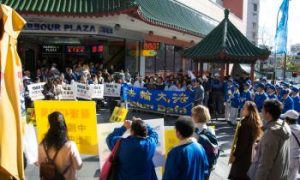 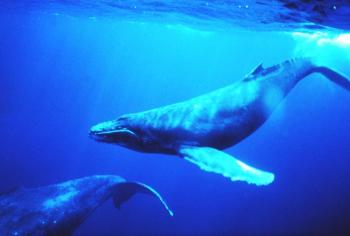 By Ivan Pentchoukov
Print
Catchy new versions of the humpback whale’s mating song have been verified to spread repeatedly across the South Pacific. An international team of researchers has found that the songs spread eastward from Australia to French Polynesia.

“Our findings reveal cultural change on a vast scale,” lead researcher Ellen Garland of Australia’s University of Queensland said in a journal press release. Published in the journal Current Biology on April 14, the study documented new versions of the song moving from population to population across the region.

The latest variations of the song moved like “cultural ripples from one population to another, causing all males to change their song to a new version,” she said.

The study identified 11 whale songs as they moved across six humpback whale populations in the South Pacific over the course of a decade. “I noticed that the songs moved quite rapidly through the six populations, usually taking two years to spread all the way across the region,” Garland said in a University of Queensland news release.

“This can compare to the game of Chinese whispers, except the song appears to be transmitted with little changes unlike a human sentence in the game,” she added.

New versions of the song usually build on the previous hit tune, yet sometimes the old song is discarded completely and a new song is introduced.

“It would be like splicing an old Beatles song with U2,” Garland said in the journal press release. “Occasionally they completely throw the current song out the window and start singing a brand new song.”

The study is the first to document a repeated and ongoing cultural-like phenomenon occurring on a large scale across multiple humpback whale populations.