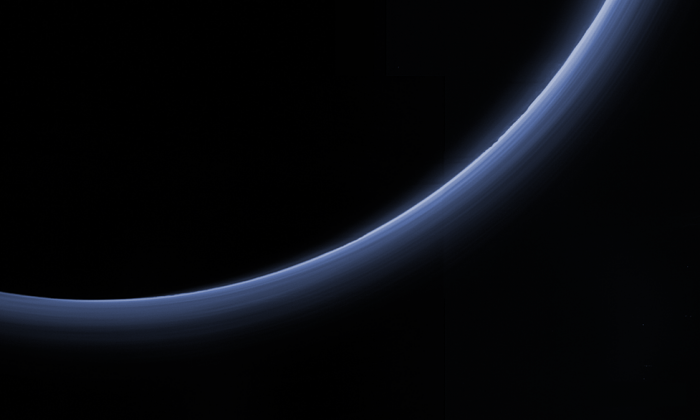 This processed image is the highest-resolution color look yet at the haze layers in Pluto’s atmosphere. (NASA)
Science

In July, the New Horizons became the first spacecraft to fly by Pluto, snapping detailed photos of the planet along the way. Processing photos taken in outer space is a complex task, and NASA is still releasing new ones from the journey.

The photo above shows Pluto’s atmosphere, the composition of which is still being speculated upon. The haze layers visible in the photo can reach altitudes as high as 120 miles, and can extend for hundreds of miles around Pluto.

“Scientists believe the haze is a photochemical smog resulting from the action of sunlight on methane and other molecules in Pluto’s atmosphere, producing a complex mixture of hydrocarbons such as acetylene and ethylene.  These hydrocarbons accumulate into small particles, a fraction of a micrometer in size, and scatter sunlight to make the bright blue haze seen in this image,” NASA said in a new post.